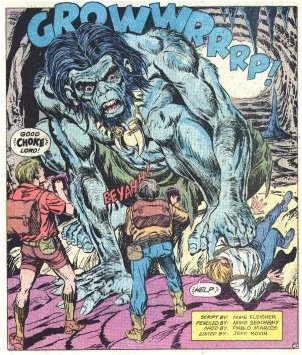 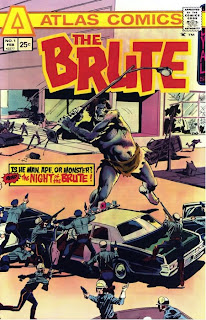 Much has been written over the years about the slightly cheesy line of 1970's Atlas/Seaboard Comics that former Marvel Comics publisher Martin Goodman and his son Chip produced after Goodman sold off his interests in the House of Ideas. His unwise decision to tackle his old company, believing that Marvel had snubbed him post-departure, resulted in a catastrophic failure of a company that barely managed to survive a year (1975) before giving up the ghost.
Atlas Comics published 23 titles and a few magazine-size comics during their all-too brief run on the stands. Trying to differentiate themselves from other publishers reader-friendly "Comics Code Authority" fare, Atlas heavily dipped into exploitation-style storytelling similar to what was popular in certain genres of movies back in those days.
One such title, The Brute was actually about a proto-human caveman who was frozen during the last Ice Age and inadvertently thawed out by the heat generated from the nuclear power plant which was built near his subterranean tomb. Hungry and confused, the Brute kills two young boys exploring his cave. Dr. Ann Foster, a scientist, is awarded the beasts custody by the court, but her plans to study him are ruined when the father of the murdered boys is subsequently killed while trying to exact vengeance.
Following this horrific opening written by Mike Fleisher and drawn by Mike Sekowsky & Pablo Marcus, the series details the Brute's savage rampage through the modern world, with Dr. Foster's increasingly inexplicable efforts to save the vicious Brute (who has gone on to wantonly murder other people), even as police justifiably hunt him with orders to kill.
The third (and final issue) possibly foreshadowed a slight change in direction, with the simplistically minded Brute finally speaking his first words, and the introduction of a costumed villain called Doomstalker. We will never know what would have come next for the prehistoric caveman, since the company folded a short time later.
Posted by Chuck Wells at 12:42 PM