Heroes: "Dying of the Light" 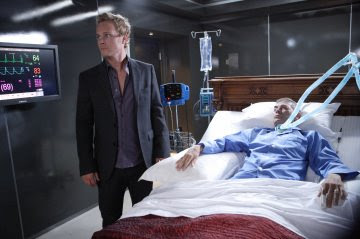 The episodes synopsis reads: "Impressed by his sudden ruthlessness, villains Knox and Daphne bring Hiro — among others — into the Pinehearst fold, and give him an assignment. With Angela and the Company paralyzed by recent events, Peter goes directly to Pinehearst for answers, and is irrevocably changed by the shocking meeting. Meanwhile, Claire and her mother Sandra attempt to free Meredith from the thrall of escaped villain Doyle, who has the ability to take mental and physical control of others. Later, Nathan brings Tracy to Suresh, hoping he can shed light on the surprising origin of their abilities."
This week was one of the better episodes of the third season and while a few of the main characters continue to act stupidly, at least this volume is finally living up to it's 'Villains' name. Arthur Petrelli and Puppet Master Doyle are truly formidable bad guys, and Mohinder is increasingly less hero and more villain, so maybe there's hope yet. I believe that I can see where they are headed with some of the supporting characters, Sylar in particular, but some of the good guys really need to wake up and quit acting like they've got their heads up their own rumps. Oh, and at least one of last season big bads has been handily dispensed with already. Guess who?
Posted by Chuck Wells at 7:12 AM

I thought the promo last week said (or maybe I read it somewhere) that we were going to learn why Claire was special this episode. But all we saw her healing power again. Did I miss something?

And how exactly did Daphne race into Level 5? Don’t they have security, scans, locks?