Heroes: "I Am Become Death" 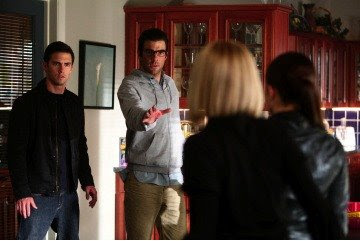 Last nights chapter of the hit NBC series Heroes leaped four years into the future and treated fans to one of the better episodes so far. The diverse cast is mixed together four years hence in ways that have been alluded to during the current 'Villains' arc, with some previously sympathetic characters going over to the dark side and familiar bad guys softening around the edges.
A few faces from previous seasons make a welcome return appearance and the mystery of Tracy Strauss (and Nikki/Jessica is revealed, although this diverges from what the series implied in its freshman season). We are also given a glimpse of what may be happening to Mohinder in the wake of his ill-advised injection of "heroes hormones".
One thing that bugged me about this episode is that, in the future mind you, Present-Peter is blamed for the catastrophe in Costa Verde by Claire, despite the fact that it was the actions of Claire's team of government sponsored, super-thugs that truly caused the tragedy. I'm guessing that Future-Claire Bennett didn't just toughen up and head on over to the dark side, she apparently went schizophrenic, too.
Despite this seasons greater focus on more of the main characters that were originally introduced in the first season, it is growing increasingly obvious that several of them are going to overstay their welcome soon. I'm hoping that this season DECISIVELY writes out at least a few of them, so that more intimate stories are forthcoming. We've now seen the future get nuked twice, and apparently, saving the cheerleader didn't actually save the world at all.
So, what the hell was that all about anyway?
Posted by Chuck Wells at 6:37 AM