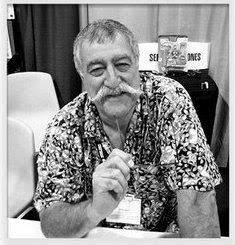 Sergio Aragonés has the reputation of being the fastest cartoonist in the world today. He’s won the National Cartoonists Society's Reuben Award, and the Will Eisner Hall of Fame Award. Sergio got his start in comics at MAD magazine in issue #76 in 1963 and his work has appeared in almost every issue since. In the early 1980’s. Aragones and writer Mark Evanier began chronicling the tales of Groo the Wanderer, a barbarian misfit whose experiences are comical in nature.
Sergio has also been an actor-performer on television (on, Laugh-In and Speak Up, America) and motion pictures (Norman, Is That You? and To Kill A Stranger). His artwork has appeared on hundreds of advertisements and editorial features, and his animation has been featured on numerous TV shows, including The Shirley MacLaine Special, The Cher Special, The Half-Hour Comedy Hour and Dick Clark's TV Bloopers and Practical Jokes.
He lives in California and is one of the nicest comic book creators that you will ever meet.
Posted by Chuck Wells at 9:37 AM