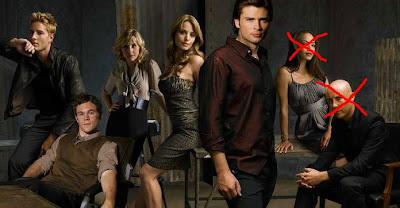 Smallville may have run its course on the CW television network (and if so, thank God). Pa Kent has long since passed away (Ma Kent has moved along, too). Lex's dad, Lionel Luthor? Gone. Oh, and Lex isn't a series regular either. Hey! Even Lana Lang, Clark's perpetual heartthrob has flown the coop.
The proto-Superman, Clark Kent is still kicking around, but less and less in the rural Kansas locale that gives the show its name, Metropolis has become the central focus of most of the stuff going on in young Clark's life. The lovely Chloe is still hanging around, and the super-hot Lois Lane is on scene (so's Jimmy Olsen), but Green Arrow seems to have adopted the role that most old-timers (like me) would assume that a younger Bruce Wayne would be providing to the budding World's Finest team.
Don't ask about the heroes that are presented as the Smallville version of the Justice League. You see, there's Aquaman, the aforementioned Green Arrow, Black Canary, Clark Kent (minus his Superman sobriquet), Cyborg, Implulse .... um, yeah .... (two Teen Titans-related characters from other regions of the DCU in place of say, Green Lantern or Flash, for instance) and J'onn J'onzz. That's the Martian Manhunter (or what passes for him on the CW network). CW = "Crazy World", perhaps?.
And now the powers-that-be at the network are going to treat us to the early years of Batman's sidekick, Robin the Boy Wonder, only it won't be a Dick Grayson in costume fighting bad guys under the tutelage of the Dark Knight. No, the newly announced series will be called, The Graysons, and deal with the life and loves (sorta 90210-style) of little Richard Grayson as he transforms into the "kid" who will lighten the mood of his future partner, Batman.
I doubt it!
Who comes up with this stuff? And what are they smoking?
Posted by Chuck Wells at 7:04 AM

I never liked Smallville (I'm Clark Kent, and I've got super-powers. WHINE.), so if it finally leaves the air after 8 seasons, it will be 8 seasons too late.

Yeah....it is a little frustrating at times with a GA relationship that should be with the Batman...
It's only right to have Lana out of the picture someway so the Lois/Clark thing can mature but, no LEX?
...I haven't seen the 7th season, but I suspect it starts there...like I told you on the phone, I was a little disappointed in the premiere episode for the 8th season...(I really wanted Tom Welling to be the star of the episode and not everyone else)...and the series IS titled "SMALLVILLE"...and he seems to be leaving that behind...(Metropolis is so close to Smallville in the series that he could LIVE IN SMALLVILLE AND DRIVE TO METROPOLIS!...for some reason the writers seem to have neglected that fact...I just hope they don't eliminate one too many elements that made this series great to begin with!!

I have tried to get into Smallville, honest, I REALLY tried, but it's about as absolutely God-awful as a show can get. I wish they'd just hurry up and cancel the thing before I have to try getting into again.