"Heroes" tonight, Do we really care? 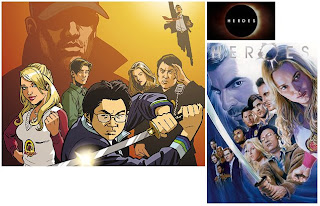 MSN TV blogger Raoul Mowatt has soured on NBC’s drama series "Heroes" and he has cited critic Maureen Ryan of the Chicago Tribune (among others) who have also become frustrated with the popular genre series sad proliferation of plot holes, loose ends and endless array of unanswered questions. Apparently some of these critics have written the three year old show off like a bad taste in the mouth.
I can’t say that I blame them.
Mr. Mowatt’s list of ten recommendations for jump-starting the creatively sagging series is [summed up] as follows:
1- Neuter Hiro, Peter and Sylar since these three characters can pretty much do anything, where’s the fun in seeing them interact?
2- Develop characters and play to actor’s strengths similar to the original season concept where the show was as much about the people as well as their abilities.
3- Idiot proof all plots so that fans don’t have to actively suspend disbelief beyond certain basic concepts. Why DID Mohinder leave his lab in order to inject himself with an untested serum, and rather than shoot his own brother, why did’nt Future-Peter simply try to convince Nathan not to go public about their super powers?
4- Mix in stand-alone episodes like the earlier "Company Man" which brilliantly explored the evolution of Noah Bennett (aka H.R.G.). Season long story arcs seem interminably long, so mixing in some instant gratification-style episodes would be a blessing.
5- Revisit some earlier plot threads and questions that had been unceremoniously dropped like Matt’s wife or his female FBI partner, Nathan's family, Peter’s girlfriend Caitlin, Monica & Micah, etc.
6- Separate the wheat from the chaff, ensemble shows are often well-balanced, but "Heroes" does’nt juggle theirs very well. I agree with Mowatt that certain cast members roles should be markedly reduced in favor of the far superior secondary characters who are more interesting. Angela Petrelli is quite prominent this season, but the Haitian could be explored much further and H.R.G./Noah Bennett is my favorite character – and he does’nt even have super-powers.
7- Avoid stereotypes such as saddling most of the minority characters with somewhat weaker powers, or presenting all of the shows women as either victims, or insane bitches.
8- Further explore the moral or social dimensions of people with superpowers and how the temptations of using these abilities might actually work against their own inner natures.
9- Please bring back some of the humor and joy to counteract the shows rampant gloom, cynicism and doom and for Pete's sake, limit the alternate-future story lines, three seasons, and three turns at that particular wheel has quickly grown stale.
10- Hey! Tim Kring. Stop aping well-known comic book story lines about the proliferation of super-powered people causing Armageddon such as DC Comics Watchmen (Season 1), Marvel’s X-Men ‘Legacy Virus’ (Season 2) and DC’s Kingdom Come (current Season 3). It defeats the purpose of showing what would happen if people had superpowers in the real world if you’re just going to duplicate famous comic book themes.
Posted by Chuck Wells at 1:38 PM