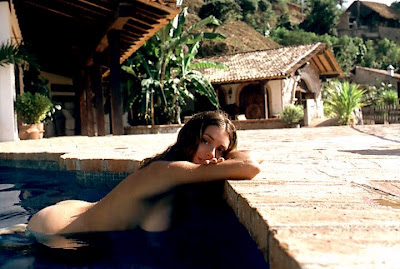 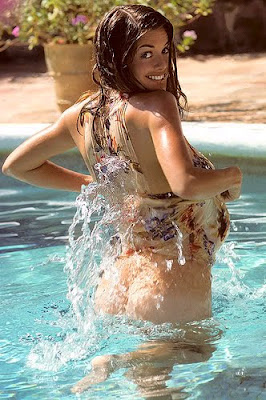 I have to admit that my recent wave of awesome golden age "Cave Girl" stories, my imminent departure for Atlanta and the goings on at this years Dragoncon, plus some behind the scenes glimpses at an upcoming jungle girl comic (thanks Ed Catto; and don't worry, you guys will get to see this stuff soon) have all conspired to bring out the "beast" in me.
So this weeks "Gal" Friday selection really had to be special and rise to the occasion. I know that you fine folks will agree with me once you look this "gal" over.
In addition to earning a spot in the Catacombs as this weeks pick, the lovely lady in question also manages a cool trifecta by qualifying as "Gal" Friday, "Classic Cutie" and a nifty "1970's Flashback" - - all in one fell swoop.
Marilyn Lange was the May 1974 Playmate of the Month in Hugh Hefner's classic men's magazine and then later recognizing the goddess they had on their hands, Marilyn was also chosen as the 1975 Playmate of the Year.
Now it ain't easy choosing appropriate photos for this "all-ranks" blog, but take a gander at the two pictures that I've opted to share with you and then - trust me on this - go search the web for Marilyn. If you aren't already familiar with her, well, to put it mildly, you're in for an amazing treat. Marilyn Lange is one of my very favorite 1970's pin-ups. She is truly the very epitome of busty & bodacious and she had one of the best racks from that late lamented decade.
Have a great weekend and "stay thirsty, my friends"! (Sorry, I couldn't resist.)
Posted by Chuck Wells at 6:49 PM

Chuck: Great shots of one of the greatest playmates ever. Love these pool shots. Was there ever anything cooler than hanging at the Hef mansion? We all have our images of the ultimate cool; i.e. - being an astronaut or hitting a home run to win the world series (both on my list of cool) - but my ultimate would be to be hanging at one of Heffner's pool parties circa 1972. Hell, I’d grow my sideburns back for that.