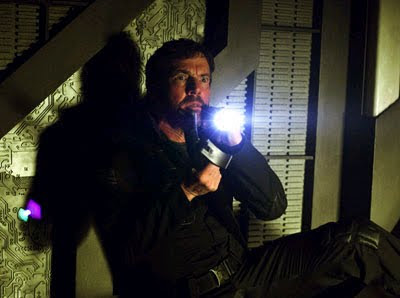 "Don't fear the end of the world. Fear what happens next."
Today I watched a riveting genre film on Netflix that apparently didn't do too well at the box office during it's original theatrical release in 2009. According to what I researched on the web afterwards, some critics just weren't that impressed, but science fiction magazine SFX was more positive, stating that "Pandorum is the finest interstellar horror in years", and awarding the film 4 out of 5 stars. Film Ireland also gave Pandorum a positive review, appreciating the film's synergy of cinematic techniques, set design, and developed characters. Audience reaction was mostly positive at website Box Office Mojo; their polls report that on a scale of A+ to F, the average grade cinemagoers gave the film was B+. I would have to side with this latter group of folks as I found the movie to be quite a bit of fun and different enough from similar films to appreciate what the filmmakers accomplished here.
Pandorum was a German/American science fiction-horror film written by Travis Milloy and directed by Christian Alvart. The film stars Dennis Quaid and Ben Foster as astronauts Lieutenant Payton and Corporal Bower, who are awakened from suspended animation during a 123-year voyage to a new, Earth-like planet called Tanis to create a settlement due to Earth’s overpopulation. They are unable to access the ship's bridge and cannot communicate with any other members of the crew of the 16,000 passenger sleeper ship, Elysium, including the flight crew team whom they are supposed to relieve.
The film’s title is explained as a psychological condition brought on by extended periods of deep-space travel and hyper-sleep. Its symptoms and effects include severe paranoia, vivid hallucinations and homicidal tendencies. Payton relates the tale of another ship, the Eden, in which a single flight crew member affected by Pandorum jettisoned every crew member into the oblivion of space, killing five thousand.
Adding to the tension, they soon encounter dead bodies and fast-moving humanoid creatures who have somehow gotten on board the ship. As Bower escapes from one of them, he encounters other human survivors, Manh (Cung Le) and Nadia (Antje Traue); and they are forced to work together to reach the ship's nuclear reactor which will fail permanently if he does not reset it.
To say much more about this film would ruin it for anyone who ultimately decides to check it out, which I recommend that you do at your earliest opportunity. German actress Antje Traue made her English language debut with this film, and although Quaid & Foster are both excellent as the leads, she is sexy and dynamic in her action-oriented role. Vietnamese-American kickboxer Cung Le was surprisingly affective as well and he overcomes a real language barrier to engage the audience, since his untranslated dialogue is spoken in his native tongue.
Posted by Chuck Wells at 5:32 PM

Chuck, I happy to read that I'm not the only one who thought that Pandorum was an excellent science fiction film. I too missed this at the theater and rented it on blu-ray, because of the lack of advertising for its limited theatrical release. I can understand why critics didn't like the film, as I sure it had too many action sequences and not enough human drama for them. However, a large segment of sci-fi fans have also dismissed Pandorum as just another Alien rip-off. The only similarities is that they both place on a spaceship in deep space. Pandorum deals seriously with deep space travel, biological adaptation and planetary colonization, which most sf films today almost completely ignore. Sure, there is plenty of violent action to keep the plot rolling, but there is much more to Pandorum than that