At Saturday's "Pint O' C.B." panel at the Fan Expo Canada Convention in Toronto, Marvel announced some really good news for writers Fred Van Lente and Greg Pak and artist Dale Eaglesham AND fans. The current eight issue Alpha Flight mini-series just got upgraded to an ongoing monthly title.
With only three published issues (plus a Point 1, which I skipped) I've enjoyed this book quite a bit. It's been terrific having the entire original team lineup restored from the classic Alpha Flight #1 (Aug.1983), regardless of how many storytelling hoops had to be implemented to accomplish this. The Alphans have also been reintroduced in their classic costumes, with a very minor (& superior) tweak for Marrina only. 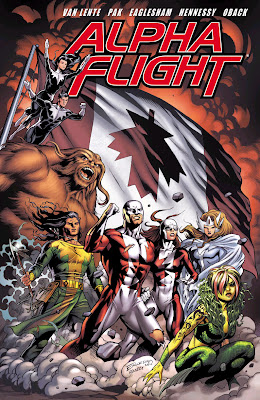 This publishing change is an acknowledgement of the talent and quality of work that Van Lente, Pak & Eaglesham have brought to the new series, and thankfully fans have responded in kind. Orders were sufficient for Marvel to make this call before the mini had even run its course. The creative team is sticking around too, so we can expect more thrills with the Canadian superheroes for some time to come. If you haven't given Alpha Flight [2011] a chance, please consider trying it out. Thus far it's easily accomplished two otherwise seemingly divergent tasks. It has been one of the best contemporary superhero titles that Marvel has been issuing (a standout feat amidst three dozen event books) and it has the innate mechanics of a classic Marvel series; proving that both tasks can be done with the right creators involved. Highly recommended!
Posted by Chuck Wells at 12:10 PM

What's with the upside-down Canada flag and where's Puck?

Just as a guess, considering the teams current status with their own government (they are considered outlaws), I thought that the flags appearance might be an intentional design element to reflect this situation.