At the Movies: Rise of the Planet of the Apes

Like many genre geeks of my generation, the original Planet of the Apes (and its four sequels) remains among the most fun sci-fi franchises of all time, so I was admittedly looking forward to “Rise of the Planet of the Apes” with equal parts trepidation and hope. I guess I needn't have worried, since “Rise” (fueled by an impressive motion-capture performance from Andy Serkis) just opened as the No. 1 movie in North America, earning an estimated $54 million at the box office.
It really deserves it too! Man, every review that I read seemingly sang the praises of Serkis performance as Caesar, going so far as to suggest that he should receive an Oscar nomination. I don't know if that will happen, but director Rupert Wyatt, screenwriters Rick Jaffa & Amanda Silver, and the fine folks at Weta Workshop have not only added an outstanding new chapter to the "Apes" film series, but in retconning certain aspects of the original mythology, they've improved upon it. "Rise" is an origin story set in present day San Francisco, where man's own experiments with genetic engineering to cure Alzheimer's Disease, lead to the development of intelligence in apes and the onset of a war for supremacy.


If you are familiar with the flicks from the late 1960's and 1970's, play close attention throughout "Rise" for some extremely cool homages to that classic series. These folks did their homework, and it shows! I would also have to praise James Franco, John Lithgow and Freida Pinto for ably supporting Serkis central role as Caesar, all turned in fine performances. Brian Cox, Tom Felton and David Oyelowo serve as the heavies in the film, with only the respected Cox receiving short shrift in actual screen time. I don't know if the producers intend to spin off further Apes films or not, but if the movie proves to be a hit, I wouldn't be surprised. It isn't necessary mind you, as "Rise" found a comfortable way to insert itself into established Apes history that makes elegant sense.
At this point, I would prefer not to go into more specific discussion; I would only encourage everyone to go see this movie. If you're a fan of the classic Apes, you are going to be very happy with this movie, and damn glad to forget what Tim Burton trotted out back in 2001. This film will tug at your heartstrings and then rile you up at the conclusion, but do not doubt that the Apes have risen again. Hopefully they'll stick around for another go at bat. Recommended! 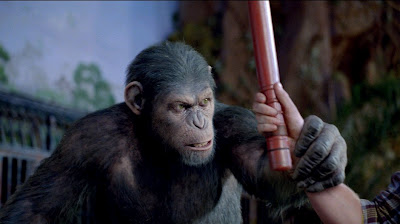 I take it you were less than enthralled with the live-action and animated tv series?

Personally, I liked the animated show with it's more-advanced Ape civilization and kool Doug Wildey art.

Never ceases to amaze me how people tend to put words in your mouth, as if they believe that they can "read" your mind.

BrittReid, there is no express praise or condemnation in regards to the televised "Apes" stuff, evident in anything I've written in this post. I simply preferred to focus on the MOVIES that have been (or tried to be) part of the franchise. That is all!

I remember watching some of the animated episodes, but nothing stands out in my mind about them, one way or the other.

The live-action series was okay with me since Roddy McDowall was involved, and let's face it, his Galen characterization shared quite a bit of common ground with his two earlier Apes roles. Mark Lenard and Booth Colman were also topnotch with me. I thought that the TV series made the same mistake that director Tim Burton did in having humans "talk", but maybe it's me.

Most genre authors, when they refer to Apes, cover the whole franchise.
(It's not as voluminous as Star Trek, covering only five (now six) features, and two short-lived tv series.)

If you choose not to do so, that's cool.

Nobody's "putting you down" for your viewpoint.

If anything, you should be flattered that others want to know your opinion!
It indicates they value what you have to say!

We're good, Britt, and I always appreciate your participation.

But you should see some of the commentary that doesn't make the cut to end up at the Catacombs. Or some of the offers and unusual requests.

So many movies with so many experiments that goes wrong.How long this old idea will work? Certainly a great director can make the difference,but is this the case?