The sequence that I’ve been presenting my personal picks for the “Top 10 Defunct Comic Book Publishers” has thus far been nothing but arbitrary, however the last few slots have proven to be a bit tricksy, and this has prompted me to waver on the actual order that I had “intended” to post these last few.

This week’s multiple nominees were always intended to be offered in tandem, and they present a fine example for why I selected a triumvirate of publishers to represent the ambitious explosion of publishers who jumped into comic book specialty shops during the 1980’s. Eclipse Comics, First Comics & Pacific Comics were just three of the many innovative, complex and independent comic publishers who did their very best to – in effect – create an entirely new golden age at the dawn of the direct only market. Other notable publishers whose heyday occurred in the halcyon days of the 80s include Aardvark-Vanaheim, Capital, Comico, Slave Labor, Caliber, Malibu and WaRP Graphics. Some like Fantagraphics and Dark Horse have endured until now, but these three enjoyed a high degree of cross-pollination in their runs that bound them together in a sense.


Eclipse Comics was one of the first independent publishers to offer royalties and creator ownership of rights, and the first comics company to publish trading cards and it published the first graphic novel (Sabre) specifically intended for the newly created comic book specialty store market. Eclipse was known for its eclectic mix of titles and products. Many noteworthy creators got their start there, including Chuck Austen, Donna Barr, Dan Brereton, Chuck Dixon, James Hudnall, Scott McCloud, Peter Milligan, Tim Truman, and Chris Ware. Veteran creators who appeared under the Eclipse banner included Steve Englehart, Don McGregor, Gene Colan and Mark Evanier. These days the company is probably best known for its role in the publication history of Alan Moore's acclaimed and contested series Miracleman. Eclipse ceased operations in 1994. 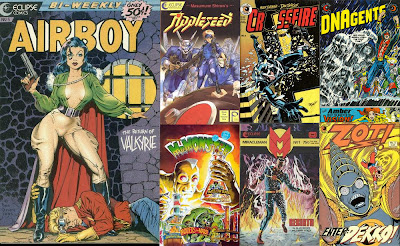 First Comics took early advantage of the growing direct market, attracting a number of writers and artists from DC and Marvel including Frank Brunner, Mike Grell, Howard Chaykin, Joe Staton, Steven Grant, Timothy Truman and Jim Starlin, to introduce their own creator-owned titles, which, not being subject to the Comics Code Authority, were free to feature more mature content. In 1984, First acquired all the titles of the short-lived publisher Capital Comics, including Mike Baron's action/superhero/fantasy/comedy series The Badger and Baron and Steve Rude’s space-faring superhero series Nexus. First was also known for initiating an anti-competitive activities lawsuit against Marvel Comics and World Color Press, being at the forefront of an industry-wide debate about creators' rights, experimenting with newsstand distribution and the revival of Classics Illustrated. First Comics ceased publishing in 1991. 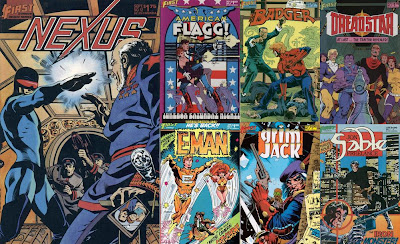 Bill and Steve Schanes launched Pacific Comics in 1981, out of their existing west coast chain of comic’s shops and distribution business. They initially enticed comics’ creator Jack “King” Kirby, who they had befriended over the years, into providing Pacific with Captain Victory and the Galactic Rangers, assuring him that he could keep full ownership and copyrights and that they were only interested in the publishing rights. Before long, Pacific had attracted the attention of other comics professionals, including Mike Grell (who recalls that he was actually the first to sign with Pacific by a couple of weeks, but that Kirby's work was published first because he "delivered his first.") who had planned for his Starslayer to appear from DC, but after it was dropped from the their publishing schedule, the brothers approached him about releasing it. Creators whose work appeared at Pacific include Dave Stevens, Steve Ditko, Art Adams, John Bolton, Bill Wray, Roy Thomas, P. Craig Russell and Michael T. Gilbert. Pacific is credited with bringing back 3-D to comics, a fleeting trend in the 1950s that had then been stymied by poor printing separations. Ray Zone was hired to do the production work. The distribution arm of Pacific began suffering serious problems in 1984, due in part to overly-generous credit extensions to retailers, who didn’t pay back as expected. A crowded market, loss of select titles that moved to other publishers and rival distributors purchasing stock from Pacific in order to push them out of the market, ultimately aborted Pacific Comics short but sweet existence. The brothers threw in the towel in 1984.﻿ 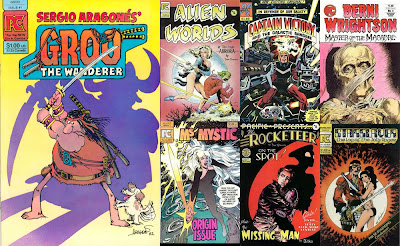 I enjoyed the Mr. Monster pre-code reprints series, Grimjack and Scout comics as well. They were fun comics that I don't believe sold very well. It's a shame.

I'll always be happy that First Comics existed if only because they published MARS by Marc Hempel and Mark Wheatley, one of the best science fiction comics ever published. Thankfully they also gave us some of the early comics of Timothy Truman (love his art), Howard Chaykin's classic American Flagg and the return of E-Man by Nicolas Cuti and Joe Staton.

Pacific Comics will forever be cherishd by fans for at least one thing: The Rocketeer. Dave Stevens. One of the greatest and best talents to ever grace a comic book. Groo and Alien Worlds weren't too shabby either :).

Eclipse Comics. Thanks for introducing RIO and Carlos McLyr in the pages of Eclipse Monthly, Mr. Monster by the great Michael T. Gilbert as well as the Sisterhood of Steel graphic novel, illustrated by the overlooked but vastly talented Peter Ledger.

Most of the comics by these companies can be had for good prices in the back issue bins. Search them out. You won't be sorry.

HA! The Rocketeer! Totally fogot about that movie but, I loved it when I was a kid. People always forget that so many good things come from a comic story.

Good News!!!
First Comics is back (and they already have books out)!...
http://www.comicbookresources.com/?page=article&id=33661

As you've all pointed out, there was quite a bit to like about each of these companies and a true breakdown of their published output would require at least another post.

Birtt, I was aware of their return and hope that it doesn't end up looking like the "revival" of Crossgen (by the way, Crossgen is next weeks Top 10 entry) over at Marvel.

Somebody at Marvel ought to be shot for what they've done with Mystic and Sigil. Why they fixed what wasn't broken is beyond me?

To one and all, I had a great time visiting four of the guys involved with these companies at Baltimore Comic-Con on Aug. 20 & 21.

Tim Truman, Jim Starlin, Mike Gold & Mike Grell were guests at the show and as always, it's good to chat with creators fo their caliber.