At the Movies: Conan the Barbarian

I just read an interesting article written by one of the screenwriters of "Conan the Barbarian" starring Jason Momoa. The newly released film hasn't been well received overall and the script doctor falls on the pungee stick in a minor mea culpa over the flicks reception.

I liked the new Conan movie well enough, and felt that Jason Momoa looked exactly like the silver & bronze age realization of the fictional Cimmerian of Robert E. Howard's original pulp stories that many Frank Frazetta paperback book covers and Marvel Comics introduced us to in the 60's and 70's, but that is exactly what was wrong with the guys currently tanking movie. The filmmakers opted for appearance over substance.

Before I get down to brass tacks, let me emphasize that the "look" of the film is phenomenal. I totally bought the Hyborean Age depicted in director Marcus Nispel's film, the CGI work is terrific and at least in this respect, this version is better than Arnold Schwarzenegger back in 1982. One terrific aspect of this flick is that Conan roams throughout his world through lots of ruins, and this helped create the impression that even ages ago entire kingdoms had come and gone by the time the wandering barbarian was beginning to conquer his world. Nice touch! 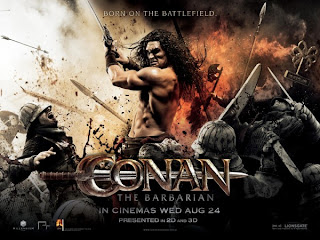 The performance of Jason Momoa was okay with me, certainly sufficient enough for me to want a second chance at Conan (which I will address in a moment). Stephen Lang as Khalar Zym, brought the expected level of intensity to his central role of the movies villain, but Rose McGowan simply didn't match him as Zym's sorceress daughter. Again, she "looked" fine and she tried to seem menacing, but primarily came across as peculiar or quirky, and nothing more. Ultimately it was weak performances that tail gunned this version, with Lang being the standout exception. While I liked Momoa well enough, Rachel Nichols (while really cute & hot) was far too lightweight in her lead action role, Nonso Anozie was a joke as Artus (Conan's black pirate friend); the fictional Cimmerian wouldn't have suffered that doofus for very long before removing his head. Ron Perlman was more "touchy-feely" than iron hard barbaric chieftain (and father of Conan), in fact the entire village of Cimmerians seemed like pushovers to me. 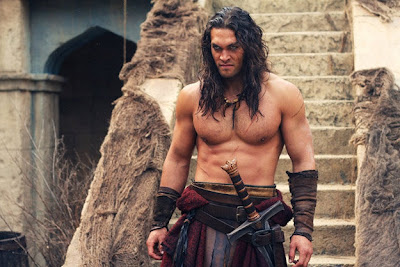 So to the scriptwriter who laments that his written characterizations got remaindered on the cutting room floor, I say, “Listen, stupid! Adapt any one of Howard’s original stories to film and quit dicking around.” Roy Thomas understood this when he spearheaded Conan for Marvel many years ago to great effect. Don’t reinvent the wheel here; it isn’t broken. Pulp fiction is full of simple character moments, but its best when wrapped around high-adventure thrills and bloodcurdling excitement. If Conan the Barbarian somehow manages to merit a Green Lantern-style studio reprieve and gets greenlighted for a sequel, bring the new look of the Hyborean age and Jason Momoa to a more skilled director and competent screenplay doctor. This isn't supposed to be Academy Award filmmaking, just satisfying summer popcorn fare. Leave the metro-sexual melodrama in the editing room instead!
Posted by Chuck Wells at 10:14 AM

I think the 'failure' of this film falls heavily in the lap of the (incompetent) director and screenwriter(s).

Sorry, but there's no way around the handful of shoddy performances in this pic either.

I'm going to have to disagree with the direct adaptation of a Howard story. I've always felt that Howard's Hyboria as a fictional universe was far greater than the sum of it's parts. Surely, there were a few of the tales that were brilliant writing (Beyond the Black River, Rogues in the House, Tower of the Elephant, Queen of the Black Coast) but these are short stories lack the full story arc a cinematic feature would require. Many of the original tales suffered from Howard's obvious attempts to pad his word count (and thereby, his paycheck) (The Hour of the Dragon, especially, is bloated word-count at it's worst.) I can't think of any one Conan tale that could be built up into a full cinematic script.

yep...and he would have punched Artus right back sending him ass over feet.

I have been a fan of Howard’s Conan since I was a teenager – close to 40 years! I didn’t like screenwriters' Oliver Stone and John Milius’ reimagining of the character in the 1982 film. I have not seen the 2011 Conan film, which from what I’ve read resembles Howard’s Conan even less than the previous film. I do not understand why studios pay so much money for literary properties then proceed to make up their own stories and characters based only vaguely on said properties. Anyone who has read any of the Conan original stories will not like any of the Conan films made thus far.

I was really looking forward to seeing a good Conan film and like you I thought Jason Momoa looked like the Conan as described by Howard and so brilliantly painted by Frazetta for the Lancer paperbacks in the 60’s. As you also state, it looks like “the filmmakers opted for appearance over substance”, which if the film were adapted from a video game character I might be able to except. However, there are thousands of words written by Robert E. Howard that details the life of Conan and the Hyborian Age that he lived in. I just don’t understand how if you have permission to use those words as a basis for a screenplay, why you would hire some hacks to make up their own crap?! I’m completely dumbfounded.

I decided to save my money and not see Conan at the theater. Still, when it arrives on blu-ray for rental on Netflix, I’ll still be spending my limited free time watching it. I just hope I can enjoy it on a visceral level and not let my love of Howard’s creation ruin for me.

Mr. Blue Genes, you may be suffering from and unfortunate condition known as a "brainfart". Tower of the Elephant and Beyond the Black River are right at the top of my list of Conan tales that SHOULD be adapted for the big screen.

If you are under the mistaken impression that any R.E. Howard story "can't" serve as the basis for a quality adventure film, then it is I who must vehemently disagree with you. Take two and call your doctor in the morning!

Go read a R E Howard CONAN story,
pick any one of them, and you'll know why this movie sort of blows.
R E Howards stories have a magic in them that none of the movies
have yet to fully grasp. CONAN #1
with Arnold is the best one made so far. Milius got a whiff of the magic in that one. CONAN #2 and now this CONAN #1a are drekkkkkkk.

When I said "liked well enough", it was me focusing on the elements in the flick that worked.

I understand that there are weaknesses in this movie, but rather than trash it outright, I would hope that what worked could be built upon in a sequel. However, I doubt that these guys will actually get that chance; but I assure you "Mr. Anonymous" that I've read plenty of Howard's original Conan stories. Loved them!

I do forgive your feeble Kreskin-style attempt to read my mind, since it gave me a good laugh.

Ha Ha Ho Ho Hee Hee - you're such a sensitive lad! My anonymous post wasn't directed AT you but more so AT the new movie you critiqued.
The Kreskin/mind-reading comment is totally YOUR head trip and I don't get the association.

Yeah, I didn't get that from your earlier words at all. As you can see, I have no problems posting your rebuttal, because I can take it. Lob those fouballs and I'll just keep knocking them back.

For future reference, only my doddering mother can accuse me of being sensitive, and the fact that I often cry while viewing chick flicks has nothing to do with it.

Don't sweat it - you're just shell shocked from all that verbal abuse you soaked up as a kid.
TallyHo!