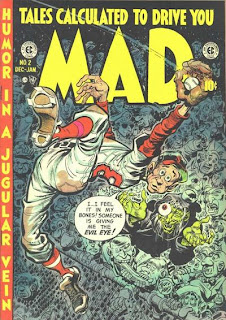 The grandfather of all gone but not forgotten publishers closes out our ten week run of the “Top 10 Defunct Comic Book Publishers” posts, with one caveat (see below).
In 1944, All-American Publications merged with DC Comics and its former editor, Max Gaines retained rights to the comic book Picture Stories from the Bible, and began his new company (known as Entertaining Comics) with a plan to market comics about science, history and the Bible to schools and churches. You see, a decade earlier, Gaines had been one of the pioneers of the comic book form, with Eastern Color Printing's proto-comic book Funnies on Parade, and with Dell Publishing's Famous Funnies: A Carnival of Comics, considered by historians the first true American comic book [check out my long running sidebar over there on the upper left side of this page].

Sadly, Max Gaines died in 1947 in a boating accident, and his son William inherited the company which is commonly known as EC Comics. William Gaines began to introduce series focusing on horror, suspense, science fiction, military and crime fiction. His editors, Al Feldstein and Harvey Kurtzman, gave assignments to prominent and highly accomplished freelance artists such as Johnny Craig, Reed Crandall, Jack Davis, Will Elder, George Evans, Frank Frazetta, Graham Ingels, Jack Kamen, Bernard Krigstein, Joe Orlando, John Severin, Al Williamson, Basil Wolverton, and Wally Wood. Kurtzman and Feldstein themselves also drew stories, which generally were written by them and Craig, with assistance from Gaines and other writers including Carl Wessler, Jack Oleck and Otto Binder.
EC Comics enjoyed great success with its fresh approach and the company pioneered in forming relationships with its readers through its letters to the editor and its fan organization, the National EC Fan-Addict Club. While their innovative stories were sensational, the art itself was also highly regarded. In fact, superior illustrations of stories with surprise endings became EC's trademark. They tackled real world topics such as racism, sex, drug use and perceptions of the American way of life in titles as diverse as Tales from the Crypt, The Vault of Horror, The Haunt of Fear, Weird Fantasy, Weird Science, Crime SuspenStories, Two-Fisted Tales, Frontline Combat, Piracy and Shock SuspenStories.

As everyone knows, in the late 1940s, the comic book industry became the target of mounting public criticism over the content of comic books and their potentially harmful effects on children. In 1954, the publication of Dr. Fredric Wertham's Seduction of the Innocent and a highly publicized Congressional hearing on juvenile delinquency cast comic books in an especially poor light. At the same time, a federal investigation led to a shakeup in the distribution companies that delivered comic books and pulp magazines across America. Sales plummeted, and several companies went completely out of business. 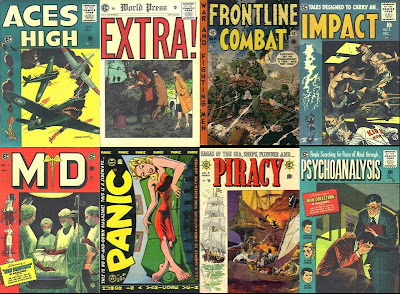 Gaines called a meeting of his fellow publishers and suggested that the comic book industry gather to fight outside censorship and help repair the industry's damaged reputation. They formed the Comics Magazine Association of America and its Comics Code Authority. The CCA code expanded on a previous trade group (Association of Comics Magazine Publishers) restrictions and began to rigorously enforce compliance, with all comics requiring code approval prior to their publication. This was not what Gaines had intended and he refused to join the association. Among the Code's rules were that no comic book title could use the words "horror", "terror" or "weird" on its covers; so many distributors refused to handle EC Comics, Gaines immediately ended publication of his primary horror and crime series on September 14, 1954 and he shifted the focus to more realistic comic book titles, including Impact, Valor, Aces High, M.D. and Psychoanalysis (known collectively as the New Direction). Since the initial issues did not carry the Comics Code seal, wholesalers refused to carry them. After consulting with his staff, Gaines reluctantly started submitting his comics to the Comics Code; but his attempted revamp failed commercially and after the fifth issues, all New Direction titles were canceled. EC Comics was all but out of business when a side project for Kurtzman began buoying the company's fortunes and became one of the most notable and long-running humor publications in history. MAD hit newsstands just as satire became an industry rage in 1954 and although other publishers instantly started knocking off imitations, none had the “sea legs” of MAD, thanks to Kurtzman, Orlando and Feldstein. Removed from the binding strictures of the CCA, MAD carried the company through its troubled period, and the magazine has endured for decades.
So that's my top ten publishing powerhouse from the past (in no particular order): Charlton Comics, Crossgen Comics, Dell Comics, Eclipse/First/Pacific Comics [tie], Fiction House, Gold Key Comics, Harvey Comics, Kitchen Sink Press, Warren Publishing and EC Comics. They helped generations of kids while away pleasant hours, hopped up on imagination, and fueled by the talents of some of the industry's greatest creative minds. But before we throw in the towel; I'm calling an audible, and leveraging in one last pick as an impromptu  "honorable mention" nominee. Come back next week for the bronze age reveal, right here in the Catacombs! 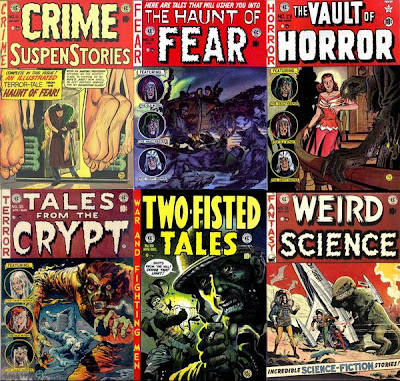 They are good books. Had a good many of them and they are always
fun to read and reread.