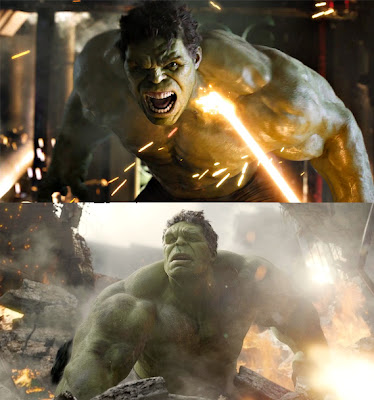 Marvel Studios pulled off a historic coup at the box office this weekend with the opening of “The Avengers” featuring an entire slate of iconic characters. Combined with the returns from its earlier European release, the blockbuster has raked in $641 million dollars in twelve days, and that’s just for starters. The foundations for this massive undertaking began with the 2003 release of “The Hulk” and its 2008 sequel “The Incredible Hulk” along with “Iron Man” in 2008, “Iron Man 2” in 2010, finally “Thor” and “Captain America: The First Avenger” in 2011. Director Joss Whedon scored big with a topnotch cast uniting all of the big stars from those films: Robert Downey Jr., Chris Evans, Chris Hemsworth, Scarlett Johansson, Jeremy Renner, Tom Hiddleston, Samuel L. Jackson, Clark Gregg, Stellan Skarsgård, Gwyneth Paltrow and two new ensemble members: Cobie Smulders and Mark Ruffalo taking over the role of Bruce Banner/ The Hulk in spectacular fashion.

It proved to a worthy effort beyond the sheer amount of earned dollars. Nick Fury (Jackson) as director of an international peace keeping agency called S.H.I.E.L.D. pulls together a who's who of superheroes to save the world from disaster, with Iron Man (Downey Jr.), The Incredible Hulk (Ruffalo), Thor (Hemsworth), Captain America (Evans), Hawkeye (Renner) and Black Widow (Johannson), answering the call when global security is threatened by Thor’s evil brother Loki and his alien cohorts, the Chitauri. Every character gets a proper moment to shine and all of the actors play well together, plus there are some real crowd-pleasing scenes that will bring a smile to your face. As is usually the case, stick around for a couple of post-credit  moments including a brief teaser for the eventual sequel that features an awesome villain that only true Marvel fans will recognize.

I won’t go into further details lest I spoil the flick for anyone, but I highly recommend that you give this film a chance to win you over. However as an aside, I feel for the longtime fans who’ve called for a boycott of this movie in support of the Jack Kirby estate. Jack “King” Kirby died in 1994 and as the co-creator of Captain , Thor, The Hulk, Iron Man, and The Avengers, Kirby was the single most influential figure in the early days of Marvel Comics. His influence extended beyond his artistic contributions as well, with his personal point of view and philosophy of drawing reflected throughout the entire publishing company. It is Marvels sad legacy that they have neglected to enshrine the “King” with as much lavish accolades as they did with his writing partner Stan Lee. Rather than boycott the film and deny yourself the entertainment, keep calling on Disney (the current owner of Marvel Comics) to finally make things right with the Kirby Estate. In all likelihood “The Avengers” will be a billion dollar box office titan in short order, and there will be no better time for the company to put this stain to rest and honor the late creator of so many classic characters. It would be the “heroic” thing to do. And shame on Stan Lee for his recent comments that he didn’t know how they would list Jack Kirby in the films credits, since his old partner hadn’t produced any of the previous films based on his creations. Hey, Stan, you’ve claimed sole credit long enough, and nobody is particularly buying that shit anymore, so grow a pair and come clean for once in your well-heeled life. Nuff said!
Posted by Chuck Wells at 11:03 AM

everything you said about Kirby...ditto

I thought it was good, not as awesomely amazing as I'd been led to believe it was going to be, but certainly a great crack. as for the big reveal, I'd pretty much sussed that one out way back when I saw Thor for the first time ( yeah, me and every other comic geek out there, I know ).

Stan needs to visit Grantbridge Street and put himself on the cunt list.

And Stan would have no control over how Kirby's name is listed. He might be listed as a producer, but it's more like an contractual honorary title than an actual job.

No, I most certainly did not miss those credits at the ass-end of the film (since I also caught the Indian diner scene with the gang munching on shawarma).

Nothing about seeing that credit negates Lee's disrespectful comments about the late Jack Kirby. Stan the "Man" did in fact say an approximation of what I referred to in this post and his doing so was widely reported, so what is your point?

None of the flap over Kirby's status would EVER have kicked up in the first place had Stan opted to take a different life path. Lee wouldn't have had to give up anything, but he chose to perpetrate AND reinforce the notion that most of the artists who co-created the Marvel universe were little more than trained "wrists" bringing "his" ideas to life on a piece of paper. It was bullshit then, and it is bullshit now or are you completely unfamiliar with the Marvel Method under which much of their collaboration occurred?