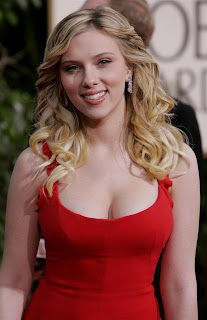 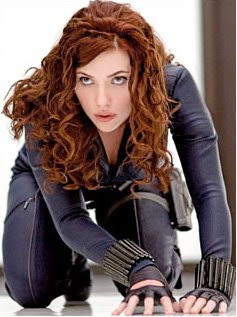 Entertainment Weekly becomes the first out of the gate news source to reveal what actress Scarlett Johansson will look like as the Black Widow in the upcoming Iron Man 2.
Here is a glimpse at an interior photo from the issue of EW of Scarlett in character as Natasha Romanova aka the Russian-born spy known as The Black Widow (and another as her normal bosomy, blond self). Yummy!
Hot and accurately based on the Marvel Comics femme fatale's actual look. Too bad they've altered Mickey Rourke's villainous mug, Whiplash, so much from his four color appearance.
Enjoy!
Posted by Chuck Wells at 12:04 PM

I can live with that.
I was actually kinda worried that they would go to the one size fits all standard issue black leather body armor. From what I can see, it looks very similar to the old comics version.

Scarlett's one of my favorites. I can probably watch her do nothing but calculus problems for 7 hours straight...even though I hate math.