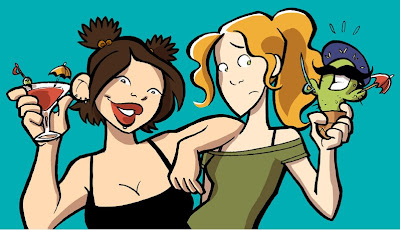 Girls With Slingshots is a weekly-daily comic about two twenty-somethings named Jamie and Hazel. Some defining terms that come to mind: booze jokes, boob jokes, relationship drama, boyfriend advice, boozin' it up, gross sex stuff, and a talking cactus.

The cactus, McPedro, has a horrible origin story! But here it is: I signed with a small company several years ago after just a few GWS strips had been released. They wanted to do plushes, but I refused to let them do plushes of the girls (because I've seen what people do to plushes). So they asked me to come up with a "cuddly new character." Snarky me, I chose a cactus. With a mustache and an Irish accent.

Q) Whose work inspired you to get into comics?

My grandpa used to read me the Sunday comics when I was a little girl, so I grew up on Beetle Bailey, Blondie, and Dennis the Menace. I was inspired to write and draw early on thanks to these old-school artists. As I grew up, I was very inspired by Jim Toomey (Sherman's Lagoon), Lincoln Peirce (Big Nate), and especially Frank Cho (Liberty Meadows). Seeing Lynn Johnston's (For Better or For Worse) name on the page always reminded me that this wasn't a boys-only club.

Q) What are your long term goals in the comic book biz?

My #1 main goal in life was always to become a full-time cartoonist. What's cool about attaining your #1 goal in life is that you get to make up entirely new #1 goals!

So my next one is writing a graphic novel. I've been working on the research and writing for the past year, and I plan to have it finished in 2012. I've also got an anthology in mind that I'd like to do. If anything I ever create becomes animated (live action or otherwise), I'll be tickled pink.

Q) What type of "tools" do you prefer to use in creating your artwork?
I do all the strips by hand. Each original is created on a sheet of smooth bristol, pre-printed with my custom non-copy blue template. I draw with a Pentel fountain pen, letter with Microns (05 for regular text, 08 for bold), and then scan it in. I add the greys with Photohop, then resize the strip, write a little HTML, and update using FireFTP.

Q) How did you happen to succeed the original creator on "The New Adventures of Batboy"?

I was doing a small convention in NYC a few years ago when this busy guy comes up and flips through a few of my sample strips.

He hands me a card and says "We could use you." Turns out he was the editor in chief of the Weekly World News. I contacted him as soon as I got home and he said he'd like me to create a new strip for them. I was nearly done with the character designs for a Sasquatch & Alien comedy when he contacts me and says, "Peter Bagge just left Bat Boy; could you take over for him?"

So I picked up "The Adventures of Bat Boy" (and added a "New" to it, as I knew my version would be very different from Peter's). I think I was there for a year and a half, and then the rag stopped printing. It was such a great paper! RIP Weekly World News... at least you're still online.

Q) What kind of comic books do you follow regularly? Any favorite characters or titles?

I rarely follow comic books, although I'm likely to pick up any trade by Oni or Top Shelf.

A friend of mine suggested "Alias" by Bendis and Gaydos, and that book... woo. Jessica Jones is like my lead Hazel, except way more dark. I loved that book, but it's probably the only series I've ever read all the way through. I still need to catch up on "Y the Last Man."

I read a barrage of web comics every morning. PVP, Octopus Pie, and Questionable Content are probably my favorites. Jeph Jacques' characters are all brilliant, but I'm kind of in love with Eve Ning from Octopus Pie. She's so delightfully irritable.

Q) There seem to be a lot of female creators in the independent or small press arena. What makes your own work stand out in a unique way?

There aren't a lot of girls doing comedy. There's a lot of romance (although I guess I'm not excluded from that!), lots of artsy books and serious books, but I rarely see women pulling a slapstick routine in their work. I think that's just fine, but I guess it is a little unusual that I find it more natural to make jokes.

Dick and fart jokes, to boot.

Q) How do "guys" seem to react to Girls with Slingshots? Does your book have alot of crossover appeal?

My readership is pretty much 50/50. This may just be because so many more guys than girls read comics. But my "squealing fangirls" are matched 1:1 by "squealing fanboys" at comic book conventions. A lot of guys say they get all their dating advice from GWS.

FYI, I like to think that my male readers are the cream of the crop. Though I might be a bit biased. :)

Q) Whats your favorite comfort food or past-time?
Sushi. I know, that doesn't sound like a comfort food, but sushi is my favorite snack, meal, and hangover remedy.

Appropriately, walking is my favorite pastime (gotta walk off all that raw fish). I walk around my town at least once a day. I live in a college down, so while it's very small, there's always something new going on. I typically zone out while I'm walking and just observe, rarely stopping to talk to anyone. It's like being inside the camera as it pans through a setting in a movie. Or being invisible. It's refreshing.

Q) Do you have any other projects pending?
The graphic novel is about a girl who works at a hospital, so I've been volunteering at the local hospital once a week since November '08. I'm hoping to start taking submissions for the anthology next year, and I plan to do all of the artwork; a different style for each different story. Mostly to prepare myself for the graphic novel.

Love Danielle Corsetto! She's a real inspiration for webcomickers. I bought one of her original strips for my girlfriend for Christmas. Thanks for the interview.