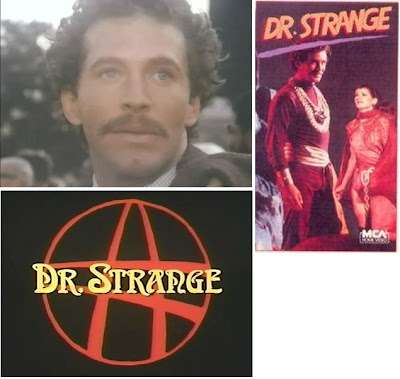 This movie is so peculiar that you almost never hear it being referenced. I admit that in the grand scheme of things, this aborted television pilot isn't as bad as several theatrical superhero flicks that have been widely panned as major "turkeys', but that's not saying much. Dr. Strange was a 1978 made-for-TV movie based on the character created by Stan Lee and Steve Ditko for Marvel Comics. It was written & directed by Philip DeGuere, with Stan Lee serving as a consultant for a proposed TV series.
A young woman named Clea becomes a pawn of the sorceress Morgan Le Fay. The primary defender of our world against threats of a magical nature, the Sorcerer Supreme, is presently a man named Thomas Lindmer (actually Merlin, the Arthurian sorcerer). He and his man-servant Wong, contact a psychiatrist named Stephen Strange, who is the heir to his father's potential to become Lindmer's disciple and the next Sorcerer Supreme. Strange bears his father's magical ring as a sign of this, and he has already sensed that something is wrong, but does not recognize the importance of these feelings of apprehension. Lindmer/Merlin must convince Strange of the reality of the mystical world wherein the battle between good and evil is being played out on a magical level, all unbeknownst to the mundane world, to save Clea and thwart Morgan's plans. Sophomoric sets & psychodelic special effects then pretty much represent the magical realms, and although the costuming does try to invoke the comic book characters, Walters as Morgan Le Fay (a mere seven years after her famous turn as a crazed stalker in Clint Eastwoods, Play Misty for Me) ends up looking like a substitute "Cher" in some back alley, cross-dressing revue.
Peter Hooten starred as Dr. Strange, with Clyde Kusatsu as Wong, Jessica Walter as Morgan Le Fay and Sir John Mills as Lindmer/Merlin. Two noted character actors from those days provided uncredited voice work. Michael Ansara (the Klingon, Kang in the classic Star Trek episode, "Day of the Dove") voiced the Ancient One and Ted Cassidy (Lurch in The Addams Family) voiced the demon Balzaroth.
Posted by Chuck Wells at 12:14 PM

I remember liking this actually as a kid. Doesn't hold up as well on viewing as an adult, didn't think the actor could act his way out of a paper bag.

But, I thought they did several things right. It had a spooky vibe in that 70's cheesy way. The actor actually looked close to the part. And he was facing off against foes as fantastic as he was with magical abilities and everything as compared to the Spider-man and Hulk (and other superhero-esque shows like the bionic family). It was a lot more like a comic come to film than others.

For any interested, I have the film made viewable in it's entirety, and I gave a complete (crazy-in-depth) review, as well as showcased of all the swag, and goodies of this movie on my Doctor Strange related blog.

Here's a link to the three most pertinent posts:

Peter Hooten was a standout in the original INGLORIOUS BASTARDS (inspiration for the new Tarentino film) from that same period so I'd have to blame it on the director or the editor that his performance seems so wrong-headed in DR STRANGE.