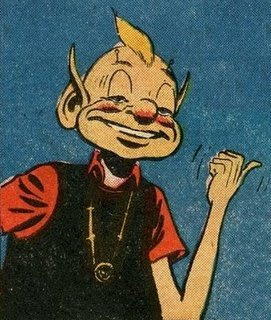 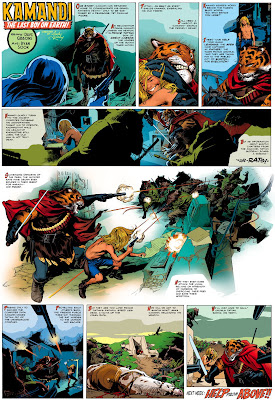 For the most part, things are rolling along nicely with DC’s Comics weekly broadsheet, experimental series and according to reports in diverse places, "Wednesday Comics" appears to be a hit (despite some mixed reviews). Of the fifteen features contained within the tabloid-sized format, Batman, Hawkman, Deadman, the Metal Men, Kamandi, Strange Adventures, the Demon/Catwoman, Superman, Green Lantern, the Flash, Sgt. Rock and Supergirl are largely top drawer entertainment by a horde of top professionals. For my money a different artist should have been chosen for the Superman strip and Batman's participation seems to be taking a backseat to the action thus far in his strip, Green Lantern & The Flash seem very suitably retro and both of these strips are very nicely done, although Sgt. Rock does little more than get smacked around for the third straight week; still these are minor quibbles. Most of the characters that editor Mark Chiarello has selected for this mini-series are well served, some like Kamandi, Strange Adventures, & Hawman really ramp up the high quality to a different level (kudos to the creators of those three strips). However, Wonder Woman & the Teen Titans aren’t really doing it for me as a reader. Wonder Woman seems to be an incoherent mess, and three weeks in, I’m still not even sure that what I am reading IS Wonder Woman. By the same token, the editorial decision to allow the color pallet to be presented somewhat muted in appearance on the Teen Titans feature has detracted from its overall effectiveness – at least for me, so both of these strips fail in my estimation.
Metamorpho is also emerging as another serious disappointment for me. Neil Gaiman and Mike Allred seemed to be a great creative pairing for this admittedly quirky DC Comics hero, and their first week tantalizingly teased the readers into thinking that this talented duo "was" on the same page as the rest of the series creative line-up, but after a nice start, somebody decided to break with the enhanced flexibility that the larger format allowed and simply hit the easy button. We've been treated to back-to-back splash pages on Metamorpho, with basically a single large panel - with subtly implied movement - substituting for actual panel-to-panel story progression. Since Gaiman is credited as the writer here, one must assume that he provided his artist with some type of script or story, although who is actually to blame for how Gaiman's story is being visually interpreted escapes me. It's not that the Metamorpho strip is being drawn poorly by Mike Allred, but my gut reaction to yet another splash page is that somebody is either being coy and just tweaking their nose at this entire project or that it's simply phoned in - so to speak. There is also another stupid in-joke-style ad running along the bottom of the Metamorpho page for the second week that has nothing to do with anything else on the page. Maybe editor Mark Chiarello is in on this conceit, and approved such a deviation, but with all of the remaining strips taking full advantage of the larger area to tell a coherent twelve week story, albeit within a single abbreviated weekly page, Metamorpho will be a major letdown if this continues on to the end.
I also have to wonder if the two-page Robot Chicken ad is going to span the entire twelve issues, or if we will be treated to anything else on this available double-spread? I would like to see something akin to an editorial column that discusses the mindset behind the project and offers fans additional insights into the genesis of Wednesday Comics.
It is also a shame that DC didn't choose to utilize a few of their all-ages properties like Scooby Doo, Looney Tunes or even Sugar & Spike, The Fox and the Crow from decades past. Angel and the Ape, anyone?
[Kamandi above by Brian Bolland & Ryan Sook is from WC #2]
Posted by Chuck Wells at 10:56 AM

I really don't see the attraction of Paul Pope and his work here. I find his figures to be a bit grotesque and his Rann is completely unrecognizable other than looking like Adam Strange is really on ERB's Barsoom. His Alanna and Sardath bear as much resemblance to their normal appearances as Adam Strange does to Tarzan. On something like this, I really expect characters to be more on-model even if they are non-continuity. Otherwise, the change itself should be a focus of the story because there's no sense to it straying that far afield. One could rescript the story without changing the art and it wouldn't even be readily recognizable as an Adam Strange story.

I would probably agree with you normally, Cash, but the ERB reference that you've pointed out is one of the reasons why I like what Pope is doing onb Strange Adventures.

This strip is so reminiscent of some of the early pulp art that used to accompany those old genre novellas, that I give him a pass for his redesigns on these established characters. Plus, it's just alot of fun to read.

Really good review. I'm especially enjoying Kamandi; the art has a bit of a classic Alex Raymond feel. And WW has serious problems.