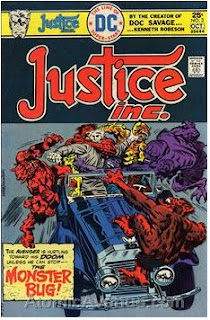 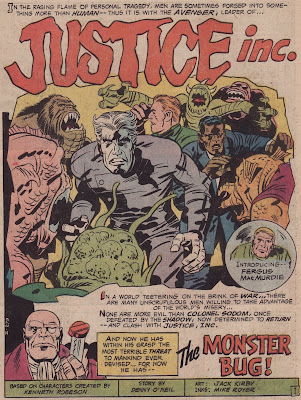 DC Comics published a short four issue run adapting Street & Smith's classic pulp hero, the Avenger as Justice Inc., in 1975. Running bi-monthly, the series had begun with a different artist, but Jack "King" Kirby took charge with the second issue.
Issue #3's "The Monster Bug" written by Denny O'Neil and illustrated by Kirby & Mike Royer picks up a storyline from DC's companion series, The Shadow, as Richard Henry Benson and his aides tackle Colonel Sodom and his germ warfare toxin which give this issue its handy title. Also introduced with this issue is another of the Avenger's assistants from the pulp novels, chemist Fergus "Mac" MacMurdie, who loses his wife after she is exposed to the mutagenic "Monster Bug" and transformed into a mindless monster; and ultimately slain by the mobsters who are trying to shakedown Fergus in his corner pharmacy.
The Avenger offers the grieving Scotsman membership in Justice Inc. and after Benson uses his special condition [the Avenger gained the ability to "mold" his own facial skin into an approximation of another persons after the shock of losing his family to crime] to physically reshape his own features into an approximation of the Colonels next victim, they track down Sodom & company.
Battling the Colonel's goons in a high rise hotel, the Avenger surprises the mad genius when it is revealed that Fergus has helped Benson develop an antidote to the "Monster Bug". Momentarily snared by the Avengers throwing knife, Sodom inadvertently steps into a cloud of his own vile vapor and is himself transformed into a mutated beast. After the changed villain is enraptured by a nearby billboard, Sodom hurls himself at the sign, but instead plummets to his doom on the street below.
O'Neil ably scripts this tale and Kirby & Moyer are both in fine form artistically, but only a single issue remains for this all-too brief series.
Posted by Chuck Wells at 12:05 PM