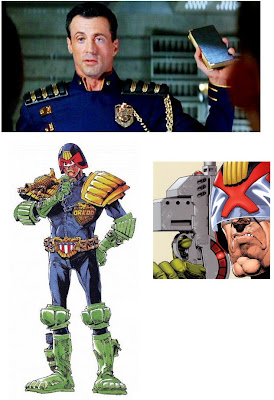 Take a popular British comic book icon, originally introduced in 1977 (& ranked #7 by Empire magazine on their greatest comic book list), then flesh out the cast of the film with an international assortment of actors (minus any British performers, of course) and then take the most universally recognizable aspect of the character and simply dispense with it in the first few minutes of the movie, and you will come close to achieving what director Danny Cannon, screenwriters Michael De Luca, William Wisher Jr. and Steven E. de Souza did in 1995's Judge Dredd.
Starring Rocky Balboa, no, I mean John Rambo; skip that, um .... Sylvester Stallone, Judge Dredd tried to capture the essence of the cult figure and then spin in so many different directions that even the fans didn't quite know what to make of it. Comedian Rob Schneider was present to provide "comic" relief (as if this ridiculous romp wasn't already worth deriding), Max Von Sydow played Judge Fargo, Jurgen Prochnow played Chief Justice Griffin, Armand Assante played Rico (at least here was a name taken from the actual Dredd series, although I don't recall if Assante really portrayed Dredd's corrupt brother in this film) and the lovely Diane Lane as Judge Hershey (another name from the comic, and someone really sweet to drool over as this crummy movie continued).
I don't remember the film having any reference to other well-established Dredd characters like Judge Anderson or Judge Death, but then there really isn't anything worth remembering about this movie anyway .... except that Sly was a real butt-monkey for not wearing Dredd's famous helmet throughout the film. We already knew what the Italian Stallion looked like, and Dredd isn't supposed to remove the lid.
Posted by Chuck Wells at 10:21 AM

that's a good bunch of points. being a Dredd fan for ages now i was really disappointed with this movie. just utter crap.

i still sat through it in spite of the fact that Stallone was cast as Dredd. utterly forgettable stuff. the helmut coming off was a real blasphemy though.

one good thing that was in the movie was the A.B.C. robot. i think he was Asante's body guard. ABC robots had a long history in 2000 AD magazine (like Dredd). not sure their paths ever crossed but the droid in the movie looked pretty cool.