How NOT to do a Superhero Movie: Wonder Woman (1974 Pilot) 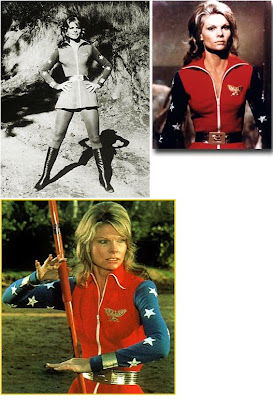 Wonder Woman's first appearance in live-action television was a pilot film (aired one year before Lynda Carter would popularize the role in another weekly series) made in 1974 by the ABC network. Starring former tennis player, Cathy Lee Crosby, the failed pilot resembles the Wonder Woman of DC Comics "I Ching" period. This Wonder Woman did not wear the comic book costume, demonstrated no superhuman abilities and her "secret identity" of Diana Prince wasn't really all that secret. The film followed Wonder Woman, an assistant to government agent Steve Trevor (played by Kaz Garas), as she pursued a villain named Abner Smith (played by Ricardo Montalban) who had stolen a set of code books containing classified information about U.S. government field agents.
Although the 1974 Wonder Woman telefilm was a minimal ratings success, producers decided to retool the product to more closely resemble the original comic book version, resulting in Crosby being let go and allowing Lynda Carter to rise to TV fame for three seasons in her more familiar-looking version of the golden age favorite the following year.
Cathy Lee Crosby's incarnation of Wonder Woman makes a one-panel cameo appearance in the comic book Infinite Crisis #6 as part of an alternate Earth.
Posted by Chuck Wells at 10:54 AM

Geez...I remember waiting for the TV movie...watching it and afterward going "What was that?"
You can see some clips from it on YouTube...why I don't know, but you can.

I. too, remember watching the TV movie and thinking, "That's not Wonder Woman."

This is not wonderwoman thats true but for everything theres a frist effort and this at least showed at least some good ideas and the need to try again.But the chars and story where still pretty good dispite the flaws...