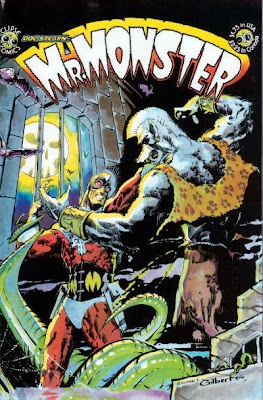 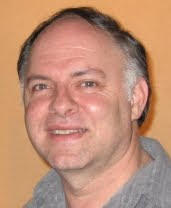 Gilbert worked with P. Craig Russell on Elric, but he is perhaps best known as the creator of Mr. Monster, which has been published since 1984 by a slate of publishers including Pacific Comics, Eclipse, Dark Horse, Tundra, Caliber Press, Atomeka and Image Comics. He has also done work for Harlan Ellison's Dream Corridor, Heavy Metal, Legends of the Dark Knight, Marvel Double-shot (starring Dr. Strange) and in 2000 he wrote and illustrated a Superman graphic novel, Mann & Superman.
If Gilbert hadn't taken an interest in the 1940's version of Mr. Monster that was originally created by Fred Kelly, it's unlikely that anybody would have ever heard of him. Kelly had created Jim Stearne (aka "Mr. Monster") for a small Canadian publisher called Bell Features. In Triumph Comics #31 (April, 1946), Jim Stearne became interested in monsters, and quickly acquired "Mr. Monster" as a nickname. When he decided to put on a superhero suit as Mr. Monster, he had one adventure, in Super Duper Comics #3 (June, 1947); and it was the last appearance of the character until Michael T. Gilbert based his own loud, flamboyant, over-the-top, monster-hating superhero, Strongfort "Doc" Stearn on Kelly's version.

Since 1990, he and his wife Janet have been scriptwriters for European publisher Egmont on Disney comics like Donald Duck and Mickey Mouse. He also writes a regular editorial column for TwoMorrows Alter Ego magazine.
Posted by Chuck Wells at 8:40 AM

Michael T. Gilbert He also wrote and illustrated a parody of Will Eisner's golden age character The Spirit, which he called The Wraith.

THIS WAS BRIAN J. BUNIAK WHO WROTE AND ILLUSTRATED THAT SPLENDID PARODY, WHICH ELICITED A LETTER FROM EISNERS LAWYERS, IT WAS PUBLISHED IN COMIX UNLIMITED A VERY LIMITED SMALL SIZE COMIX ZINE

Michael T. Gilbert here: Actually "Anonymous" is correct. And the comment that followed was partially correct too. In 1976 I created a Spirit parody, called the Wraith for the "ground-level" comic Quack! However I also published an underground comic in 1974, Amazing Adult Fantasies (aka New Paltz Comix #2) that included Brian Buniak's Spirit parody, The Sprite. Will Eisner did contact us, thinking The Sprite was a continuing feature. Once we told him it was a one-shot parody, all was forgiven.

I have no idea where I originally got that incorrect information, and I apologize for the gaffe.

Let me take this opportunity to say "hello" to Mr. Gilbert for stopping by the Catacombs, and consider this a heartfelt plea to bring back Mr. Monster ANY OLDE TIME (like "NOW") - big fan here - and it makes me sad that I've not had a chance to say so in person [keeping my fingers crossed on that one].

And right now I'm working on sequel to that one featuring one of Basil Wolverton's greatest monsters. It's called "Mr. Monster vs the Brain Bats of Venus!"

And congratulations on a great site, Chuck!

Thanks for giving me the heads up on those issues, Michael. I try to stay mindful of the stuff that gets published, but as I buy fewer things these days, it can prove somewhat challenging to see what's falling through those cracks.

New Mr. Monster adventures being one that I would not wanna miss out on, so here I go a-hunting again!

Do appreciate the positive comments on the Catacombs. The hiatus has taken longer than intended, but I do plan on getting back into the groove sooner rather than later.