Alfred Harvey founded Harvey Comics in 1941 (after acquiring Brookwood Publications) and featured a combination of characters it inherited from Brookwood, licensed characters such as the Green Hornet and Joe Palooka and its own original characters. It was Harvey’s stock of licensed characters which became the bulk of their output. These included Famous Studio staples Casper the Friendly Ghost, Baby Huey, Herman and Katnip, and Little Audrey. Harvey also licensed characters from popular newspaper comic strips, such as Mutt and Jeff and Sad Sack. Additionally, Harvey developed original properties such as Richie Rich, Little Dot, Hot Stuff the Little Devil, Stumbo the Giant and Little Lotta. Many of these classic titles were created by their most prolific artist, Warren Kremer. Trivia: Harvey's well-known mascot was "Joker" a jack-in-the-box style character. 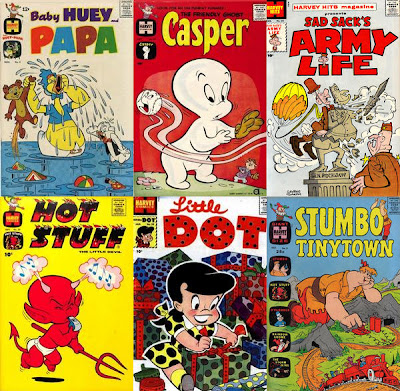 While the company tried to diversify its line with brief forays into superhero, suspense, horror, western and other genres, kid comics ultimately were their true forte. In 1959, Harvey purchased rights for the entire Famous Studios roster, then repackaged and distributed these shorts to television as Harveytoons, even as the company continued production on new comics. Casper the Friendly Ghost, who had been Famous' most popular original character, now became Harvey's top draw and associated characters such as Spooky the Tuff Little Ghost, The Ghostly Trio, Casper's horse Nightmare and Wendy the Good Little Witch were added to the Harvey line.

Due to a declining children's comics market, Harvey ceased publishing in 1982 and founder Alfred Harvey retired. Diamond Comic Distributors owner, Steve Geppi, paid $50,000 for Harvey's entire archive of original art from the Harvey comic Sad Sack, plus additional properties in 1984. Since then the entire Harveytoons media catalogue has been passed around through a variety of entities, but for generations of youngsters, their classic lineup of family-friendly characters remains timeless.
Posted by Chuck Wells at 2:00 PM

Harvey Comics continued publishing both reprints and new material until around '90-91 when the children of the Harvey brothers sold the non-superhero/horror/sf properties to Jeffery Montgomery.
(I worked there from 1988-90, and they continued publishing for almost a year after I left.)
Alfred Harvey's kids retained the art and archives of the unsold properties (including Sad Sack), and attempted a comics line based on them called ReCollections.
They even attempted to start a NEW Black Cat comic...
http://blackcatcomics.com/NowPlaying.htm

Harvey's kid comics, from Richie Rich to the supernatural worlds of Hot Stuff, Casper, Stumbo and the rest, are a true bright spot in my reading memory. To this day I can come across a story and read it, not just filled with nostalgia, but can gain a real joy in the extraordinary art and solid stories. A real shame that there's no market for comics for kids anymore.

Britt, there were also a couple of notable lawsuits involving the Harvey progeny, Geppi and other entities around that time and I honestly didn't want to delve into that mess for this post. Interesting reading and odd factoids for sure, but despite those efforts, once the Harvey stuff left the newsstands, it was all she wrote anyway.

I miss this company being on the racks quite a bit.

Harvey continued to at least 1994 under the "Harvey Classics" moniker, with titles such as UNDERDOG, VALLEY OF THE DINOSAURS,THE FLINTSTONES, etc., mostly with reprinted CHARLTON COMICS stories from the early-mid 1970's