You've seen tons of this company's stuff in the Catacombs and we're all the better for it, trust me. Fiction House enjoyed a thirty year run publishing pulp magazines and comic books between the 1920s and the 1950s. Thurman T. Scott first expanded into comic books in the late 1930s, when that emerging medium seemed to be a viable alternative to fading pulps sales. Will Eisner & “Jerry” Iger, premiere "packagers" of complete comic books on demand for publishers looking to enter the field, convinced Scott to release Jumbo Comics #1 (Sept. 1938), featuring the company's most popular character, Sheena, Queen of the Jungle. Trivia: Jack "The King" Kirby cut his artistic teeth on a couple of that issues strips. Fiction House quickly became known for pinup-style good girl art in such series as Cowgirl Romances, Fight Comics, Firehair, Jungle Comics, Ka'a'nga, Jungle King, Planet Comics, Rangers Comics, Sheena, Queen of the Jungle, The Spirit (five issues, 1952-54), Wambi and Wings Comics. Most of these series took their titles and general themes from the earlier Fiction House pulps and this model proved to be a hit. 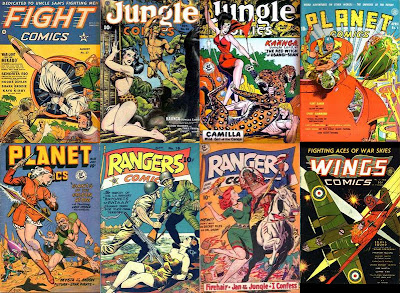 Fiction House employed in-house or on a freelance basis such ground-breaking artists as Mort Meskin, Matt Baker (the first prominent African-American artist in comics), Nick Cardy, George Evans, Bob Powell, Lee Elias, and a contingent of rare female comics artists including Ruth Atkinson, Fran Hopper, Lily Renée, and Marcia Snyder. In fact, Fiction House's pulp-action stories predominantly featured strong, beautiful, competent heroines as nurses, pilots, detectives, spies and jungle queens; and they didn’t stand in any need of rescuing by the guys. These tough gals would just as soon sock the baddies in the chops themselves, as look at them.

Fiction House was one of the publishers specifically targeted in psychiatrist Dr. Fredric Wertham's book Seduction of the Innocent (1954), which partially blamed comic books for a rise in juvenile delinquency. In addition to horror comic books from other sources, Wertham cast blame on the sexy heroines of Fiction House, Fox Comics and others. As a result of this wide-ranging investigation by the Senate Subcommittee on Juvenile Delinquency, a public outcry by parents, a downturn in comics sales (along with the demise of the pulps) and the popularity of television and paperback novels competing for readers leisure time, Fiction House faced an increasingly difficult business environment, and closed shop. It’s easy enough to see that they just don’t make ‘em like Fiction House any more. Trying to buy affordable copies of these books on eBay is a challenge, but highly worth the effort!
Posted by Chuck Wells at 1:14 PM

"By 1953 the publishing industry of pulps and comic books was rocked by political scandal, self-censorship, lost readership, and the growing popularity of television. For the second and final time in his life, Thurman T. Scott ordered Fiction House to cease all publishing.

Any idea who now owns the rights to FH properties like Kaanga? Evidently in 1984 Scott was still active enough to sell the rights to Sheena to Paul Aratow (which I believe Aratow still holds).
Thanks!
Darci

AC Comics was dealing with Thurman T. Scott﻿ in 1987, and he gave AC permission in writing to reprint all Fiction House material (except Sheena). So, afaik, Bill Black still has the rights to the characters.