Happy Halloween from the Catacombs! 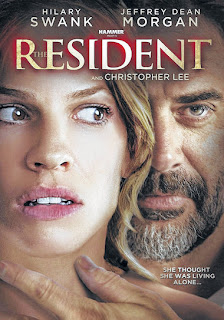 The little ghosts, ghouls and goblins will be out in force tonight to relieve you of the burden of some sugary treats, unless you’re planning a slate of nifty tricks to offset their cravings. Here is the last of my 2011 Halloween Film Festival reviews, and of this years grouping, this surprisingly turned out to be my personal favorite. Remember, I chose a handful of genre films, both old and new, that I had never actually seen before.
When a beautiful young doctor, newly estranged from her unfaithful boyfriend, suspects that something is just not right in her new loft, she discovers that her landlord has formed a frightening obsession with her. The Resident, from the reconstituted Hammer Films studio banner, is co-written by Finnish director Antti Jokinen and stars Hilary Swank, Jeffrey Dean Morgan and Christopher Lee. Although it was shot in , and in 2009, The Resident was only given a limited worldwide release in 2011, primarily going direct to DVD. That’s a shame, since although the movie has received a primarily negative response from some critics; others have praised Swank’s performance in a taut, slow-simmering thriller. 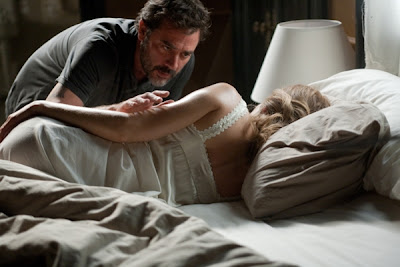 I would have to agree with the latter. This film marks a reunion for Swank and Morgan, who previously starred in the romantic comedy-drama "P.S. I Love You" in 2007. Morgan too, is particularly strong as a disarmingly charming, but ultimately gonzo psycho-killer opposite the – let’s face it – sultry, slim and sexy Swank (who's also a two-time Academy Award winner). Charges that The Resident is too generic and rife with plot holes and lack of originality ring false as well, the voyeuristic film is still an effective, atmospheric edge-of-your-seat experience with topnotch camera work and great performances by both leads, plus for genre geeks, it’s nice to see Hammer veteran Christopher Lee featured in a prominent supporting role. 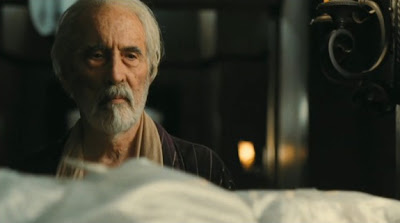 Yes, movie-goers have seen stuff like this before, but The Resident is perhaps so good, that jaded critics simply don’t want to give it a pass based on familiarity alone. Hey, dipshits go watch Halloween 5 or Friday the 13th VII or A Nightmare on (whatever) or just waste even more time suffering through their various recent memory reboots. The Resident is highly recommended by the Catacombs. To the friendly folks at the revived Hammer Films, if you guys ever make anymore throwback cave woman thrillers, and stand in need of a suitable replacement for pin-up queen Raquel Welch; please consider giving Swank a call.
Posted by Chuck Wells at 10:17 AM