Hey, if you are planning on attending this weekend’s New York Comic Con, and if you’re a fan of the classic 1960s TV show My Favorite Martian, Starring Bill Bixby and Ray Walston, then Hermes Press has something cool for you. 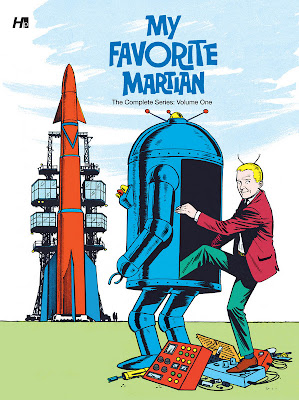 Debuting at the NYCC, My Favorite Martian: The Complete Series-Volume One will be sold at a special convention price of $29.99, which is a whopping $20 off of its retail cover price! If you’re new to Hermes Press’ line of classic reprints, this is a good one to start with. My Favorite Martian had a great run in comics with scripts by the prolific Paul S. Newman and terrific art contributions from Russ Manning, Dan Spiegle, and Mike Arens. Now, Hermes Press has digitally remastered the original Gold Key comic book of the ‘60s in another of their library of quality hardcovers. Packaged with a sweet retro ‘60s design, My Favorite Martian can be found at the Hermes Press booth (#1903) this weekend at NYCC (while supplies last). A second volume, which collects the British comics, is due out next year.
My Favorite Martian: The Complete Series-Volume One, Hardcover, 224 pages (regularly $49.99), on sale at NYCC for only $29.99!!
Posted by Chuck Wells at 1:01 PM