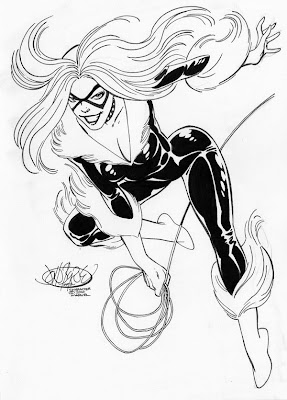 I have previously mentioned that I had chosen to acquire an official John Byrne commission sketch, and also that I had opted to make getting it a bit interesting, by allowing the board members at his website to select the final subject of my commission from a list of ten characters that I had predetermined. To view my previous post on the matter click commission.
Marvel Comics character, The Black Cat, received the most votes from the participants at Byrnerobotics and now, John Byrne has completed the drawing.
I couldn't be happier with the results, and as you can see for yourselves, Felicia Hardy (aka The Black Cat), turned out spectacularly.
In fact, this one is so good, that I may have to break down and get another. The next highest vote getter's in the poll were 3-D Man and Doc Samson.
Now, which one should be next ..... ?
Posted by Chuck Wells at 2:30 PM

Byrne's still got it, huh? That's a BEAUTIFUL drawing, Chuck, I absolutely love the way he rendered Felicia's leather costume - And what a great expression on her face!

You know, I thought that I had previously posted the first two Thun'da stories from that classic "all Frazetta issue", but as I look back through the Catacombs backlog, I can't confirm that. I did find one non-Frazetta Thun'da adventure, but no luck on the others.

I may have to post the whole issue, they are all terrific short stories by Fox & Frazetta.