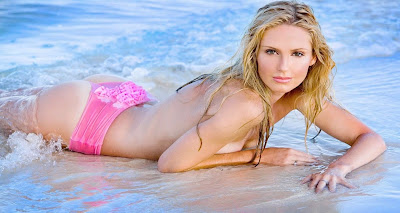 I hope that you will agree with me that the Catacombs selection for this weeks "Gal" Friday feature is simply "fabulous!"

Vanessa Branch is easily recognizable as the spokesperson for Orbit Gum, in those commercials she always closes with her signature line, "Fabulous! No Matter What."
I definitely say the same about her. Ms. Branch holds dual citizenship in the United Kingdom and the United States. She also speaks fluent French and Mandarin Chinese and she was Miss Vermont in 1994.
Vanessa has appeared in such films as Pirates of the Caribbean: The Curse of the Black Pearl, Pirates of the Caribbean: Dead Man's Chest, Pirates of the Caribbean: At World's End (Giselle in all three), The Cell and John Q. On television she has appeared in Star Trek Voyager, The Invisible Man, She Spies, LOST, Monk and CSI: Miami.
She plays the role of Zhana Agonskaya in the video game Command & Conquer: Red Alert 3 and she voiced the character of Beatrice Portinari in the video game Dante's Inferno.
Blond, lithe, semi-British and still dreamy at the tender young age of thirty-seven, the fair Vanessa is certainly fabulous enough to rate a spot in the Catacombs .... no matter what.
Posted by Chuck Wells at 8:21 PM

The fact that Ms. Branch speaks Mandarin Chinese makes her so hot she almsot ingnites. Why is that? Of course, even if she couldn't talk at all, she would sill produce a pretty brilliant glow.