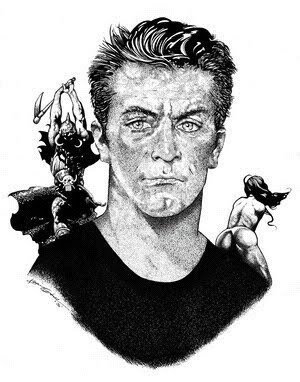 Frank Frazetta, one of the true godfathers of fantasy, science fiction and comic book illustration has passed away at the age of 82 from an apparent stroke in Florida.
Frazetta started drawing comic books at the age of sixteen in various genres: westerns, fantasy, mysteries, historical, and funny animal comics, which he signed as "Fritz." His talent was noticed at the outset of his career and yet he turned down job offers from Walt Disney. In the early 1950s, he worked for EC Comics, National Comics, (including the superhero feature "Shining Knight"), Avon, and several other comic book companies. Much of his work in comic books was done in collaboration with his friend Al Williamson and mentor Roy Krenkel.
Frazetta produced memorable work on syndicated strips like his own Johnny Comet, Flash Gordon and Li'l Abner, which he left after nine years [in 1961] with Capp to return to comic books. He eventually joined Harvey Kurtzman on the bawdy parody strip Little Annie Fanny in Playboy magazine.
Frazetta then really kicked his career up to a different level, whith his iconic painted covers on paperback science fiction and fantasy novels, such as the Conan the Barbarian series. In addition to this work, he produced movie posters, record album covers and worked in animation. In 2009, Frazetta's "Conan the Conqueror" painting was the first of his personal holdings to be offered for sale, and was purchased by a private collector for $1 million.
The Catacombs expresses its sincerest condolences to his family, friends, colleagues and worldwide fans.
Posted by Chuck Wells at 5:54 PM

A great giant warrior king has gone quietly into the night.But not without a struggle or without a fight.He's slaughtered many dragons and hideous beasts.But when day was done,he settled down for a much needed feast.He travelled in space and under the sea.He's been in worlds that no one in their lifetime will ever see.He found and lost the love of a beautiful wife.He lost and found found new meaning in his life.Through sages and spirits,he tried to seek new meanings and ways to understand.But it was through pen and pencil that explored the different universes in his hand.A dark underworld with monsters,a jungle lord,master of apes,the strongest barbarian who conquers and shows no fear.A space hero who soars to the stars year after light year.May you find your true place of rest and peace,oh great warrior.May your journeys and tales here on earth last forever.Liam