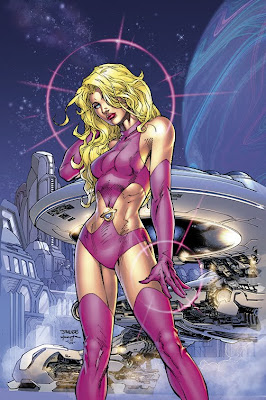 This is an alternate cover for the upcoming relaunch of DC Comics, Legion of Super-Heroes by Jim Lee. The character depicted is, of course, founding Legion member Saturn Girl and she is sporting her classic 1970's costume, which was designed by the late, great Dave Cockrum.
You have no idea how badly I wish that DC would return the Legionnaires to their 70's vintage uniforms. Doesn't this look ... AWESOME!
I think that this could work, and I know that there are lots of LoS-H fans out there that agree with me.
Right?
Posted by Chuck Wells at 8:46 PM

Yes to Saturn Girl... No to Cosmic Boy.

Actually yes to everyone except Cosmic Boy

Actually, although Dave Cockrum excelled at costume design, Saturn Girl's pink bikini was designed by a fan, K. Haven Metzger. Someone at DC did tweak the boots and maybe made some other minor alterations.