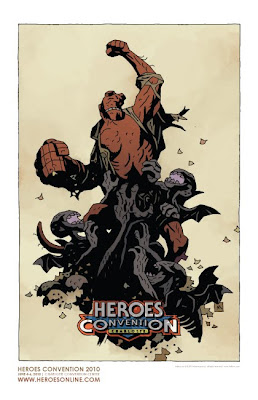 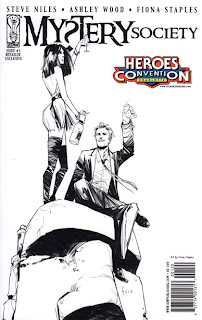 By this time next weekend, I will be hip deep into the Heroes Convention in Charlotte, NC, now in its 29th year. Sponsored by Heroes Aren't Hard To Find owner, Shelton Drum and his army of loyal volunteers - rather press-ganged employees. The Heroes Convention has earned much respect from within the comics industry for being family-friendly and also for reaching out to every demographic you could possibly name. The popular "Indie Island" area which focuses on small press creators and publishers has grown so huge that "continent" might be a more appropriate term these days.

The massive Heroes Con guest list is comprised of hundreds of top industry writers, artists, editors,, publishers and other folks who return year after year for some good old Southern charm. The show pulls in hundreds of guests each year and there are always some interesting surprises even after twenty-nine previous events. Just take a look at this list of names: Brian Bolland, Frank Cho, Guy Davis, Rob Liefeld, Mike Mignola, Dustin Nguyen, Tim Sale, Ben Templesmith, Bill Willingham, Skottie Young, Steve Niles, Steve Epting, Humberto Ramos, J. Scott Campbell, Jim Cheung, Joe Linsner, Roy Thomas, Joe Jusko, Pat Broderick, Mark Waid, Bernie Wrightson and Jim Starlin. If those standouts aren't enough for you, rest assured they represent just the tip of the iceberg, as there will be over two hundred more working professionals to visit with at this years Heroes Convention. Be sure to also check the separate "Indie Island" guest list after following the link (above).
It never ceases to amaze me how many comic book industry folks regularly line up to attend this event and for the fans it is truly like a comic book smorgasbord. There is literally something for EVERYBODY to enjoy. No matter whether you like golden age, silver, bronze or later. small press, underground, esoteric, all-ages. You name it, and you will find it in Charlotte.
Come and join us next week (Friday through Sunday), June 4-6, 2010 in Charlotte, North Carolina for one of the best comic book conventions in the world. You will be very glad that you did!
This year there will be at least a dozen incentive exclusives for fans in attendance. From a dozen special "Heroes Con" editions of popular comics to be signed by guests or for those lucky fans who purchased advance tickets, a limited edition Hellboy print (pictured; above) which will be signed & numbered by Mike Mignola.
Posted by Chuck Wells at 5:11 PM

I envy all that are attending this year.