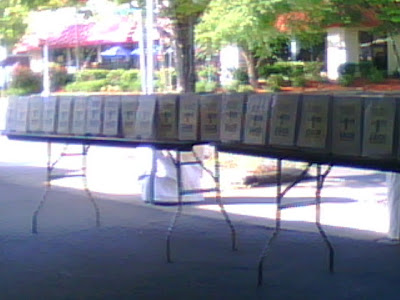 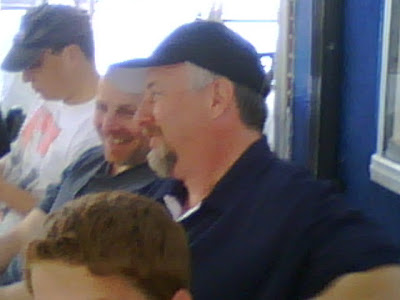 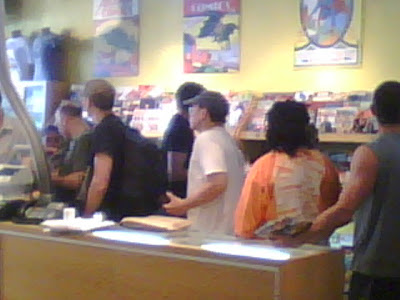 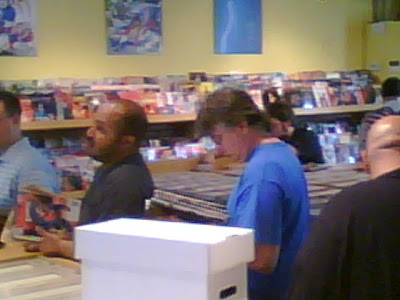 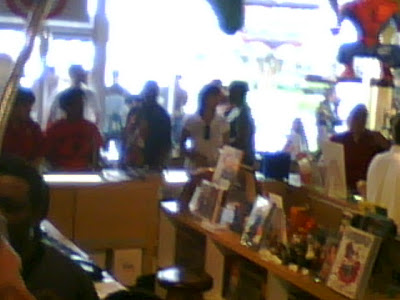 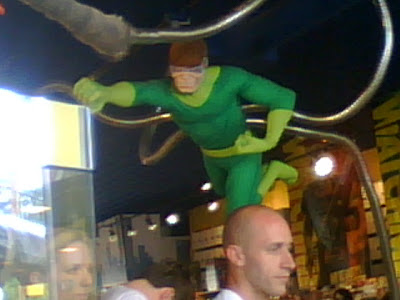 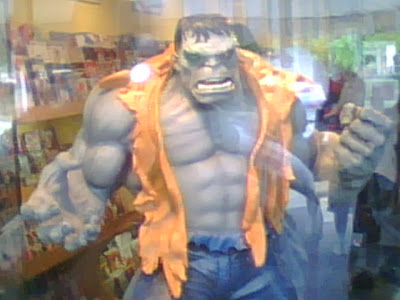 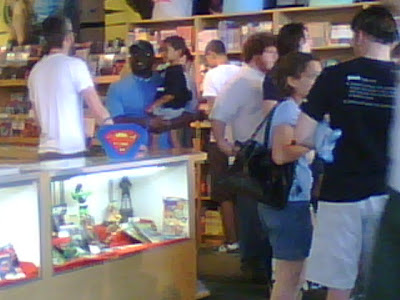 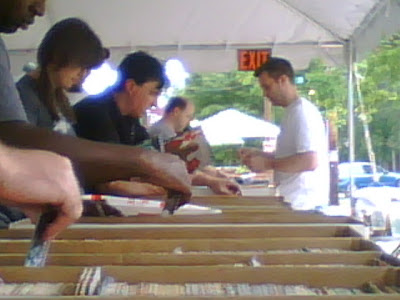 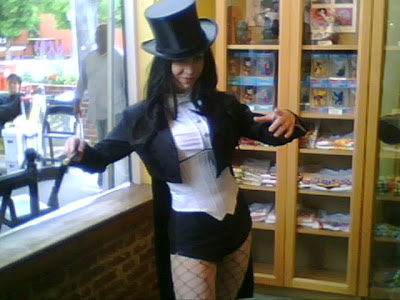 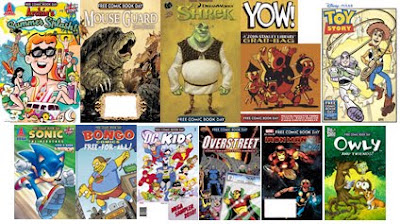 Yesterday, I spent Free Comic Book Day 2010 at Heroes Aren't Hard To Find in Charlotte, North Carolina. Heroes sponsors the annual, popular & famous Heroes Convention in Charlotte, generally around Father's Day each year.
Heroes owner/founder, Shelton Drum also throws one of the best FCBD bashes that you could ever attend and this year, with the assistance of Shelton and many current and former Heroes Con guests, Heroes also partnered with Twenty Two, a premier art gallery and wine bar to present a month long display called "Super! The Fine Art of Comics". The exhibit will run throughout the month of May and close during next months Heroes Convention. At Twenty Two, you can currently see and/or purchase fabulous artwork by Adam Hughes, Brandon Peterson, Jack Kirby, Brian Stelfreeze, Cully Hamner, Mark Brooks, Budd Root, Andy Smith, Steve Ditko and Joe Jusko (among many, many more great comic artists).
My brother David, my nephew Jack and our buddy Burt all rendezvoused early at the Heroes store location and then patiently waited for the festivities to kick off at 10am. It was worth getting there early, in order to score copies of the FCBD offerings which Heroes had in abundant supply. FCBD titles actually do cost the stores money to provide, and therefore this event allows each store to set conditions under which customers can acquire these "freebies". Heroes allows each person one copy of every issue available, but given the crowd that arrives, some of them go pretty fast. This year copies of Love and Capes went like hotcakes, but that was the only title that I was unable to nab for myself.
I would like to take this opportunity to thank the fine staff at Heroes, plus all of the publishers, distributors and creative folks who put this years assortment of books together. It was especially pleasing to see that so many of the titles (above;left) were geared towards a general audience, particularly the dozen books that were completely safe for small kids to enjoy. The Heroes FCBD gala typically draws whole families, lots of kids, and a diverse ethnic clientele, along with the rest of us hard corps geeks and all of us are made to feel like part of a large, extended community of friends. Thanks, Shelton!
Of course, attending Free Comic Book Day in Charlotte meant driving from Greenville, South Carolina in order to hang out all day with other comic book lovers, talking about cool stuff, having a few brewski's along with some terrific eats, and just basking in an entire day of FUN.

The photos included with part one of my FCBD report represent the general atmosphere throughout the day at Heroes as the crowd grew and settled in for the event. [Above;top to bottom] Tables featuring $1 comics boxes, David Wells & Burt Dellinger share a laugh, the egg-hunt for freebies begins, discount customers begin to form a line, the crowd starts to swell, a life-size Doc Ock battles Spidey above the Heroes store checkout, Where did the Grey Hulk come from?, Dustin Harbin (facing away) answers a few questions, fans swarm the $1 discount boxes and Zatanna magically appears at the event. These were cellphone captures, so forgive the quality of some of them. In part two, I will share some specific details about the guests who were there to draw free sketches and some other interesting aspects of what turned out to be an awesome day in Charlotte.

Absolutely sterling report of one of the most noble ventures in America today! This made me feel great to be a comic book lover!!