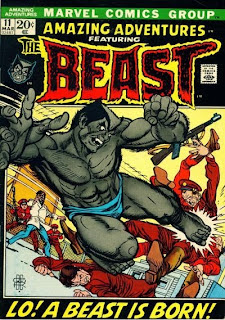 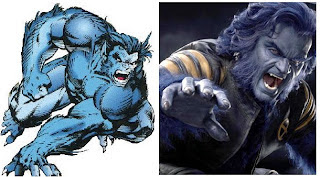 Created by writer Stan Lee and artist/co-writer Jack Kirby, the Beast first appeared in X-Men #1 (September 1963). As a mutant, Beast possesses superhuman physical strength and agility and oversized hands and feet, having an ape-like basis to his powers. Despite his savage appearance, he is a brilliant man of the arts and sciences; he is a world authority on biochemistry and genetics, the X-Men's medical doctor, and the science and mathematics instructor at the Xavier Institute (the X-Men's headquarters and school for young mutants). He is also a mutant political activist. Fighting his bestial instincts and fears of social rejection, Beast dedicates his physical and mental gifts to the creation of a better world for man and mutant. He also has a witty sense of humor.
During 1972, in Marvel's Amazing Adventures #11, Beast underwent a radical change in appearance, mutating into the familiar blue, furry creature that he has remained ever since. Having left the X-Men, Hank McCoy becomes a research scientist at the Brand Corporation, a genetics research facility. There Hank isolates a "hormonal extract" that allows anyone to become a mutant for a short period of time, and uses the mutagenic serum on himself to disguise his appearance while foiling an attempt to steal his research. However, he waits too long to reverse the process, leaving him permanently transformed. He has grown gray fur (which later turns blue) all over his body and acquired sharp ears, elongated canine teeth, claws, the ability to run on walls and ceilings like a spider, enhanced senses, an accelerated healing factor, and a feral side he struggles to control. He briefly joins the Brotherhood of Evil Mutants when Mastermind wipes out his memory, but quickly recovers. When the Beast was wounded, he was aided by Patsy Walker, and then reunited with his old girlfriend Vera Cantor. Back at Brand Laboratories, Hank discovers that his assistant/girlfriend Linda Donaldson is a Communist spy, and the confrontation, though heartbreaking, is inevitable. Over the next decade Beast would appear on the roster of several teams in titles ranging from Avengers to Defenders to X-Factor.