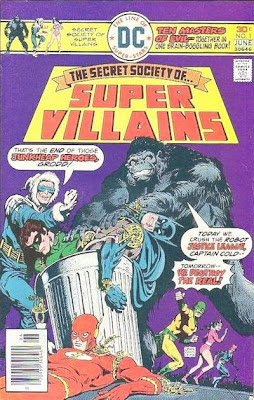 The Secret Society of Super-Villains #1 was published in May, 1976. It is the precursor of such contemporary spins on villainous teams like the modern version of the Suicide Squad, and the Society that is currently forming around Lex Luthor in DC's Justice League of America title.

Originally organized by Darkseid, the Secret Society of Super-Villains (who operated out of the Sinister Citadel) was plagued by internal power struggles. Lex Luthor, the Wizard, and Funky Flashman all jockeyed for control of the powerful team; heroes Manhunter and Captain Comet, on the other hand, sought to divert the villains' evil ways into a more positive channel by infiltrating the group to usurp its leadership. After such dissembling caused some initial confusion over the true purpose of the team, the SSoSV fully dedicated itself to evil and found a primary nemesis in Captain Comet. After the "bad guys" discovered the true identity of their alien benefactor, they rebelled against Darkseid. To quash the uprising, Darkseid dispatched Mantis and Kalibak. At the conclusion of the battle ,Manhunter sacrificed himself to stop Darkseid. Following this action, the entire team splintered, with Luthor and Flashman heading up competing groups of villains. However, it was the Wizard who proved to be the most successful, by stealing leadership away from Flashman's group and creating the definitive incarnation of the SSoSV.