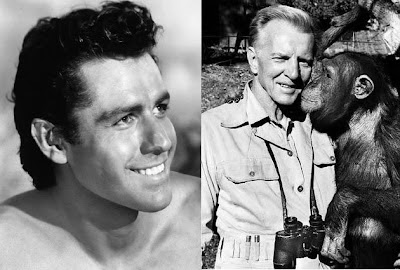 I was reading through an obituary list of notable celebrities, sports figures, authors, statesmen, etc. today when I noticed that two famous movie Tarzan actors had passed away in 2007:

Gordon Scott (April 30) played Tarzan in five feature films, including two (Tarzan's Greatest Adventure & Tarzan the Magnificent) which are considered to be among the best Tarzan films ever made. He was 80 years old when he died from complications resulting from multiple heart surgeries. Scott was memorable for his muscular physique, probably the most buff guy to ever assay the role and for his string of Italian sword epics. Three of Scott's early tv Tarzan pilots were cobbled together into Tarzan and the Trappers in 1960.

Herman Brix (February 24) was an Olympic shot-putting medalist who played Tarzan in 1935. Brix was edged out of the role by Johnny Weissmuller (who soon became a major star), after being injured in another film. Burroughs Enterprises later cast Brix as Tarzan in their independently produced The New Adventures of Tarzan & Tarzan and the Green Goddess. Brix portrayal of the ape man is the only time that the character was accurately depicted in film. His Tarzan was a mannered, cultured, soft-spoken, well-educated English lord who spoke several languages and didn't grunt. Brix later used the name "Bruce Bennett" for many of his other film appearances. He was 100 years old when he died from complications following a broken hip.
Posted by Chuck Wells at 10:00 AM

Gordon Scott was a great Tarzan, perhaps the best. I do not recall if I have ever seen the Herman Brix movies.

May they both R.I.P.