The word "legendary" truly applies to actor James Arness, who passed away on Friday at the age of eighty-eight. Arness famously starred as Dodge City Marshal Matt Dillon on "Gunsmoke" from 1955 to 1975 and reprised his iconic role in five telefilms between 1987 and 1993, a feat that remains un-duplicated on the small screen. 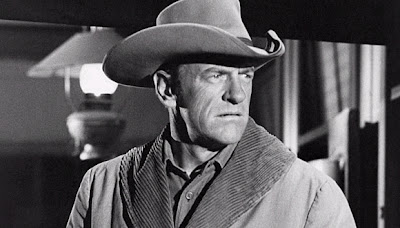 Arness also appeared in two crucial genre films of the 1950's, The Thing From Another World and Them!. His other notable movies include The Farmer's Daughter, Battleground, Wagon Master, Carbine Williams, Big Jim McLain, Island in the Sky, Hondo and The Sea Chase.
Of course his equally famous brother, Peter Graves of the original Mission: Impossible, died slightly more than a year ago. Arness was also a combat veteran of World War 2, who was seriously wounded at the Battle of Anzio, an event which left him with a lifelong limp. He was an intensely private man who preferred to avoid discussing personal tragedy, as when he lost both a daughter and former spouse to drug addictions.
They just don't make them like this guy anymore. The Catacombs extends its sincerest condolences to his family, friends and fans worldwide.
Posted by Chuck Wells at 10:23 AM

The passing of James Arness is truly sad. I loved GUNSMOKE from its very first show until it went off the air, and then watched the GUNSMOKE TV movies. If you won't mind, I'd like correct your comment that Peter Graves was "of the original MISSION: IMPOSSIBLE." In the first season actor Steven Hill played the leader of the group, Dan Briggs. Peter Graves as Jim Phelps came on board as the leader in the 2nd season.

Robert, Hill's "Dan Briggs" character is my personal favorite team leader from that series, but there's no way around the fact that both he and Graves were cast members of the "original" television series; so no correction is necessary. Graves logged more active seasons than Hill, which makes him the more familiar face in syndicated fans minds. Chill, bro!