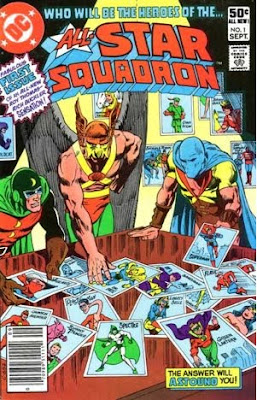 All-Star Squadron was created by Roy Thomas, Rich Buckler and Jerry Ordway, and following a debut in Justice League of America #193, their book chronicled the adventures of a large team of superheroes, including members of several established DC Comics groups like The Justice Society of America, The Freedom Fighters, and The Seven Soldiers of Victory, as well as many other solo heroes. The original premise was that following the bombing of Pearl Harbor, President Franklin Roosevelt gathered all available superheroes at the White House and personally asked them to combine their forces to battle enemy sabotage and maintain peace on the home front during World War II. At the time, many Justice Society members had been captured by the villainous Per Degaton, so the available heroes were asked to first guard against a potential attack on America's West Coast. Degaton himself used stolen Japanese planes to launch such an attack, so the Squadron's first major mission was to stop the attack and rescue the captured heroes, who then became part of the new group. The rationale for not using the Squadron in combat within the European or Pacific Theaters of War was that Adolf Hitler had possession of the Spear of Destiny, a mystical object that gave him total control over superheroes with magic-based powers or a vulnerability to magic (including Superman, Green Lantern, Doctor Fate, and others) who crossed into territory held by the Axis Powers. America's entry into World War II had already prompted several members of the JSA to enlist, or be drafted in their civilian identities including Starman, Hawkman, the Atom, and Johnny Thunder.
All-Star Squadron was an example of "retroactive continuity" or "retcon", as it rewrote the officially-established history of DC superheroes that had been previously published during the 1940s. The first known use of the term "retcon" was by writer/editor Roy Thomas in the letter column of All-Star Squadron #20 (April, 1983). During its 67 issue run, several storylines ironed out previous continuity errors, fleshed out characters' origins and rewrote some earlier stories to explain inconsistencies in character development, resolve lingering continuity questions or fill in missing details.
Following DC Comics 1985 crossover event Crisis on Infinite Earths, the parallel universes DC had established over the decades were merged into a single fictional universe. "Golden Age" versions of DC's major mainstream heroes were largely eliminated from earlier continuity, leaving the All-Star Squadron with characters deemed unique to that time period. Superman, Batman & Robin, Wonder Woman, Aquaman, Green Arrow & Speedy, Plastic Man, and a few other heroes were no longer considered to have existed at that point in history, and were thus never Squadron members.
Posted by Chuck Wells at 10:26 AM

I loved the first couple of years of the All-Star Squadron and hold it up as an example to do retcons correctly. Thomas didn't casually re-write comicbook history as much as he tried to include as much of it as possible, thinking there are hidden stories in those gaps and coincidences. Near the end, he got bogged down in the minutiae of the continuity and history at the expense of the stories. But, for awhile there he showed that continuity was a tool for telling stories, not an impediment and the stories had meaning because of the context. Nowadays, writers cannot even be bothered to honor the continuity set forth just a couple of years ago.

Great post. I am a Justice Society nut and it all started out when I was a kid reading All Star Squadron. Now I'm all grown up with a complete run of that book and I still love to go back to it time and time again.

Cash, I would have to give Thomas a free pass on the latter issues of All-Star Squadron since his hands were effectively tied by the upper management/editorial decision to launch Crisis in the first place, and the resulting consolidation of the multiple Earths concept pretty much stripped away alot of the charm that had long been inherent in that corner of the DCU.

Roy tried hard to recapture the magic by force-feeding retroactive "placeholders" into existence for the missing big three (Supes, Bats, and Wondy), but Iron Munro, Flying Fox and Fury were very pale substitutes.

They would have been better off just focusing on the remaining big guns of the JSA and doing exactly what they did - eliminate Superman, Batman and Wonder Woman.

Its not like the DCU didn't have dozens upon dozens of other golden agers.