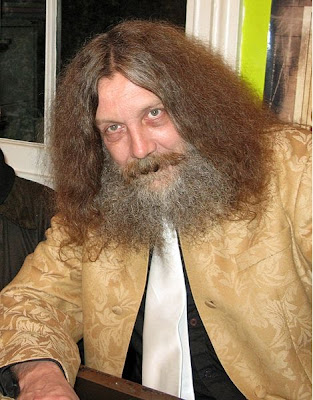 Trolling around the net for some interesting quotes today, I came across this one by Alan Moore, author of acclaimed comic books such as Swamp Thing, V For Vendetta, From Hell, Watchmen, The League of Extraordinary Gentlemen and the entire ABC imprint from Wildstorm.
This comment was made by Mr. Moore when comparing big budget films to comics, “If I write a crappy comic book, it doesn't cost the budget of an emergent Third World nation. When you've got these kinds of sums involved in creating another two hours of entertainment for Western teenagers, I feel it crosses the line from being merely distasteful to being wrong.”
Now that makes sense considering his well known stance on accepting royalties from works of his that are often adapted into motion pictures.
*********************************************************
I just read a fascinating interview with Moore that I believe that other comic book fans should read. It is both insightful and surprisingly wistful in tone, considering the types of things that Mr. Moore is credited with within the industry. Click [here] and don't forget to read the comments this discussion has started earning.
That stuff is revelatory as well!
Posted by Chuck Wells at 6:33 PM

I dunno. Let's say that M people buy a movie ticket, while N people buy a comic book, and a movie provides S minutes of entertainment while a comic book produces T minutes. The relevant comparison is between the movie budget and the budget involved in producing that comic book multiplied by M/N * S/T.