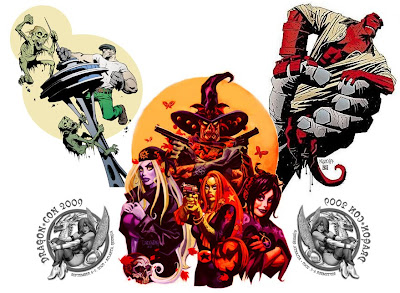 Dragon*Con is the largest multi-media, popular culture convention focusing on science fiction and fantasy, gaming, comics, literature, art, music, and film in the US. Dragon*Con 2009 kicks off today and runs through until Labor Day (September 4 - September 7, 2009) in Atlanta, GA.

I will be there bright and early tomorrow morning representing the Catacombs. Considering the dramatic costuming that is always on display at Dragoncon, my party of peeps and I have decided to dress as aging fan boys in order to get into the spirit of the show, so I doubt that you would recognize us anyway.
There are over 400 guests in attendance ranging from science fiction & fantasy authors, tons of motion picture and television actors, directors and writers, and many cool bands that will be performing into the wee hours each evening. Since I maintain a comic book blog, I thought that it would be nice to highlight the comics industry folks who will be in Atlanta. You will be able to meet and greet this large list of comic book professionals (but some others that I am unfamiliar with will also be at the convention):
Avatar Press, Dan Brereton (The Nocturnals), Mark Brooks, Bob Burden, Matt Busch, Tommy Castillo, Amanda Conner, Darwyn Cooke , Peter David, Desperado Publishing, GW Fisher, Francesco Francavilla, Gaijin Studios, Stephanie Gladden, Michael Golden, Sanford Green, Everette Hartsoe, Bill Holbrook, Rich Larson, David Mack, Jim Mahfood, Nathan Massengill, Mike Mignola (Hellboy), Dean Motter, Ted Naifeh, Jimmy Palmiotti, George Perez (w/Hero Initiative), Brandon Peterson, Eric Powell (The Goon), Brian Pulido, Humberto Ramos, Don Rosa, Andy Runton, Ken Steacy, Studio Revolver, Wayne Vansant, Loston Wallace, Greg “Dark One” Williams and Renee Witterstaetter
Whew! That's not too shabby,even with Paul Dini's cancellation. Wish me luck as I attempt to line up a few interviews for the Catacombs, and fair warning, if you are a hot chick (or if you are bringing a hottie with you); and IF you or they are wearing something revealing or sexy - all bet's are off. Inebriated or not, I'm squeezing some flesh.
Posted by Chuck Wells at 7:58 AM

Man I wish I could get down to Atlanta for that, it would be worth it to see all the costumes. It must be still pretty hot in Georgia now too?