How NOT to do a Superhero Movie: The Punisher (x 3) 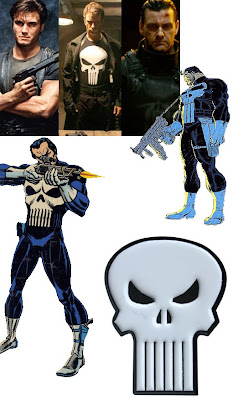 I could really milk this character for three separate movie posts, but why bother when each film falls a bit too flat to outright enjoy.
The Punisher originally made his comic book debut in Marvel Comics, The Amazing Spider-Man #129 (Feb. 1974), which introduced Frank Castle, a Marine veteran of Vietnam, whose wife and children were murdered by the Mafia after witnessing a gangland execution. Vowing war on the mob, Castle names himself The Punisher and embarks on his new mission.
Now obviously, the motion picture industry would eventually get around to adapting such an action-oriented tale to film, but after three tries - with decidedly mixed results - it seems that the guy just can't catch an audiences attention.
1989's The Punisher starred Dolph Lundgren as Frank Castle. This version changed many details of the characters origin and the Punisher does not wear his trademark "skull" emblem. Instead of wife Maria, son Frank Junior and daughter Lisa; this film called Frank's wife Julie, and the '89 celluloid couple had two daughters, Annie and Felice. In the comic book, Frank Castle was a former U.S. Marine; in this crappy movie, he was changed to a police detective. [Now that's some inspired screenwriting!]
Marvel Studios eventually rebooted the film series with 2004's The Punisher starring Thomas Jane as Frank Castle / The Punisher and John Travolta as Howard Saint, a money launderer who ordered the death of Castle's entire family. The film is NOT a sequel to the 1989 version. This time the story was based on two published comics stories; The Punisher: Year One and Welcome Back, Frank; along with scenes from other stories such as Marvel Preview: Featuring The Punisher #2, The Punisher War Zone and The Punisher War Journal. The 2004 Punisher was rated R for pervasive brutal violence, language and brief nudity, making it one of the few Marvel films to receive an "R" rating, however the success of its DVD sales prompted Marvel Comics and Lionsgate to start development on a sequel titled The Punisher 2, which fell apart after Thomas Jane and the director left the project due to creative differences over how it was being handled.

After a gap of only four years, The Punisher: War Zone was released in 2008 starring Ray Stevenson as Frank Castle. This film is yet another reboot which follows the origin of Frank Castle's war on crime and corruption rather than a sequel to the 2004 version. It is the first film to be produced under the Marvel Studios and Marvel Knights production banner, which will focus on films for mature audiences. In the film, Castle wages a one-man war against a horribly disfigured mob boss known as Jigsaw, played by Dominic West. Punisher: War Zone was paid the rare complement of being the best made crummy film of all time, by a number of critics. It was also the lowest grossing box office film featuring any Marvel Comics character.

Who knows where the guy will appear onscreen next? At least the Punisher can't help but do better than these also-ran efforts.

i liked the 2008 version because i liked Ray Stevenson from his work on the HBO series Rome, for what that's worth. plus i just like seeing dastardly villians get what they REALLY deserve- NO MERCY!

Have to say, I actually enjoyed the last two Punisher movies. Of course part of that is I'm not really heavily vested in the character in general, but both made decent action movies.

The Thomas Jane version gave a sympathetic character, one who came across as intelligent as well as capable, and able to outplan the bad guys in a Count of Monte Cristo way, arranging things so that they turn on each other. There was a bit of self deprecation humor as well.

The most recent, just watched it on DVD. It's a darker, more brutal movie, firmly in fitting with the character's more violent aspects. In some ways it's almost a horror film as a superhero action film. It's a Punisher that has been doing this for awhile, he's extremely capable but you see it wears on him. There are some problems, where they rip off some better movies like Boondock Saints, but a whole lot better than it should have been. The actor had a great brooding haunted face.

The Punisher has such a great simple and iconic look, I do wonder why they spend so much effort not going with it. I can see not going with a purely super-heroic look with white gloves and boots, but would like to see the skull and gun belt more prominent.

I think that the Punisher would have worked better "theatrically" as a foe for Spider-Man.

Certainly this character would have allowed for a different film dynamic than the Goblin or Doc Ock characters.

At this point, after Raimi botched the third movie, cramming so many villains into the mix; its a wonder that they resigned him for additional sequels.

Spider-Man has a huge rogues gallery, and some of them, despite the obvious superhero trappings are basically street-level criminals (Big Man, the Enforcers, Crimemaster AND the Punisher).

I'd like to see Raimi take a break from the big movies and rediscover his more primal self in movies like Darkman. I think the third Punisher movie had a lot of the Darkman feel.

I am curious in this day of superhero movies, why we haven't seen some smaller companies doing their own superheroes like Darkman, M.A.N.T.I.S., or even a public domain property like the Black Bat, Phantom Detective? Why spend the big bucks on the licensing?

Personally, I'd love to see a big-screen WWI sci-fi action hero epic with G-8. Movies have finally gotten to the point where they could really capture the larger than life feel of those stories.

As much as I would like to see G-8 and His Battle Aces brought to the big screen, after the lukewarm reception to Sky Captain (a pretty darn good flick), I doubt that one wil ever happen.

I can't disagree more with your low opinion of the third movie, I thought that was the best-done Punisher movie yet. Lots of action, with a dark, gritty feel to it. Villains that are so evil you can't wait to see them killed as horribly as possible and the Punisher? Finally someone's got the message that someone who lives his life fighting a "war" is not going to look like a movie star.

I would blame the unpopularity on this movie on a lack of publicity. I never heard of it until I saw it in the local video store.