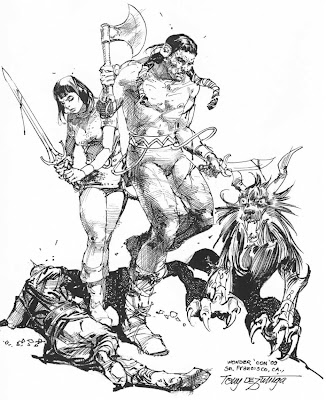 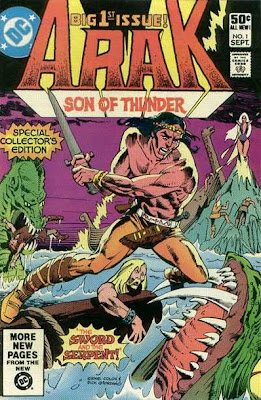 Although Arak, Son of Thunder ran for fifty issues in its own title, the character originally appeared in a preview inserted into Warlord #48 (August 1981), the sword & sorcery series was created by Roy Thomas and Ernie Colon. Art [above;top] is by Tony DeZuniga, who had a long run on the series as penciller or inker (from Michael Rankins, Comic Art Fans Gallery).

Bright-Sky-After-Storm was very much portrayed like a Native American Conan in the early issues of the book. Later, after encountering the Moirae who explain his destiny to him he takes on a more traditional Native American appearance, including fringed leather pants and a Mohawk hairstyle. Arak typically encountered beings and creatures from real-world mythology and legends of Greek, Norse, Judeo-Christian, Muslim and Oriental lore. Arak was refreshing in how culturally sensitive it was for the times when it debuted. Unlike earlier Native American heroes, like Apache Chief, who took a cartoonish view of Native Americans similar to the old western movie Indians; Arak did not feature broken speech patterns or other stereotypical "Indian" traits.
Arak's mother, Star-of-Dawn (of the Quontauka Indian tribe) was seduced by an evil serpent god while wandering alone. She realized at the last moment what was happening, and tried to escape before their coupling could be completed. He-No, the Thunder God responded to her desperate prayers, and rescued her by taking her into his realm. Under his care she recovered from the serpent god's poisonous bite, and she willingly gave herself to him in gratitude. Although she enjoyed her time with him, she did not really love him and missed her people; so He-No returned her to her tribe. Her grandfather, the tribal shaman, recognized the touch of both deities upon her, and determined that she bore He-No's child. Star-of-Dawn named him Bright-Sky-After-Storm, for 'he will follow in his father's footsteps, who is the thunder'. Years later, a tribe that worshiped the serpent deity attacked the Quontauka tribe, even as the serpent deity itself attacked He-No; the Thunder God was winning his battle, but saw that his son about to die. He-No struck down Bright-Sky-After-Storm’s attacker, but He-No suffered severe wounds in the process. While most of his tribesmen were slaughtered, his father arranged for Bright-Sky-After-Storm to escape beyond his enemies' reach in a canoe and float out to sea.
Bright-Sky-After-Storm was discovered at sea by Vikings just before the canoe sank. He was unconscious, but awakened long enough to utter the phrase He-No (a reference to his Native American father) and swing a knife at the Viking leader. Bright-Sky-After-Storm cut off the Viking leaders necklace which had a symbol called a hammer of thunder (related to the god Thor from Norse mythology). The leader wanted to kill the boy, but another Viking stopped him and adopted the boy, renaming him Arak and raised Bright-Sky-After-Storm as a Viking, trained in warfare. Arak was particularly effective with a small axe, similar in proportion to the native American club that he was found with, but he also used a sword, shield, and bow. Arak, Son of Thunder was unusual in that its Vikings were depicted more like real Vikings and were not illustrated wearing stereotypical horned helmets and fur clothing.
Arak joined the Vikings on their raid of a monastery for treasure, including a huge gold bejeweled cross which the captain hung upside down on their mast as a good luck hammer of thunder. At the conclusion of the first issue, a sea serpent sent by the sorceress Angelica attacked both the Vikings and some of the monks. All of the Vikings, including Arak's adoptive father, were killed. Arak then seized the golden cross and threw it at the serpent. Having a sharply-pointed bottom, the cross pierced the roof of its mouth and entered its brain, killing it.
Posted by Chuck Wells at 12:38 PM

Thanks for the excellent description of this fun series, one that I also enjoyed at the time. Beautiful illustration by Tony DeZuniga, who keeps getting better and better. Gary Peterson, Omaha, NE

I appreciate this well written post. I've been debating about picking up a lot of about 40 issues, and you've helped me make my decision. I look forward to entering the world of Arak!