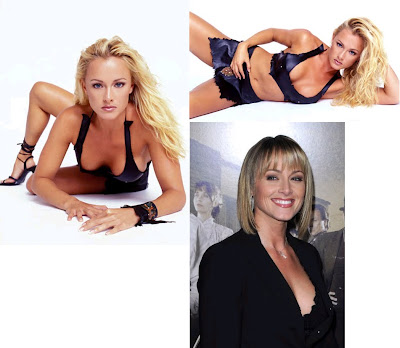 I'm off to Dragoncon in Atlanta, but lest I forget, here is today's "Gal" Friday!
Jennifer O'Dell starred on the syndicated television series Sir Arthur Conan Doyle’s The Lost World as Veronica, the jungle-clad female lead. This “exposure” elevated Jennifer to a different level from her previous career doing guest spots on shows like Beverly Hills 90210, Diagnosis Murder, Pacific Blue and The Profiler; and ultimately opened doors to appearances on today's most popular television shows including Angel, Scrubs, Las Vegas, Charmed, CSI: Miami, The Closer, Nip/Tuck, Shark & Two and a Half Men.

She has also appeard in two independent films, The Man Who Came Back and Nevermore and has been cast in the upcoming feature, The Redemption of Sarah Cain.

You would be hard pressed to find a more fetching jungle girl than O’Dell as Veronica Layton. Blonde, buxom, sexy (yet believably strong) in the role, Jennifer was pretty much the only good reason to tune in the Australian produced series during its two season run.
Posted by Chuck Wells at 7:18 PM