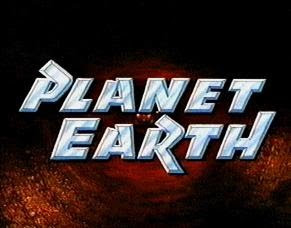 During the 1970's, Gene Roddenberry made three separate attempts to launch a sci-fi television series around a concept set in a post-apocalyptic world. Planet Earth was the second effort, following a previous failed pilot, Genesis II (made in 1973 and starring Alex Cord). This one aired on the ABC Network on April 23, 1974. Planet Earth starred John Saxon as Dylan Hunt, a 20th century man revived from suspended animation by an organization called PAX. It was intended as another pilot for a proposed weekly television series and it featured many of the concepts, characters, sets and props from Genesis II.
A third and final movie, Strange New World, aired in 1975; also starring John Saxon (but in a new role, as Captain Anthony Vico). In this version, a trio of astronauts returns to Earth after 180 years in suspended animation to locate the underground headquarters of PAX and free the people placed there in suspended animation.
None of these three pilots was developed into an ongoing series; however, some of the characters served as prototypes for the later syndicated TV series, Andromeda (based on Roddenberry's original ideas).
I've seen all of these films, and they are occasionally aired on TV, but I wouldn't mind picking them up on DVD. Does anyone have information on whether these telefilms are available? Even bootlegged copies would be appreciated.
Posted by Chuck Wells at 9:47 AM

I could help you out with AVI versions if you were interested.

Ah, Audio Video Interleave, not that I know what that actually means or anything.

Jim, you can reach me by email to make any arrangments and clue me in.

Go to my "About Me" profile (on the left side of this page) and click it.