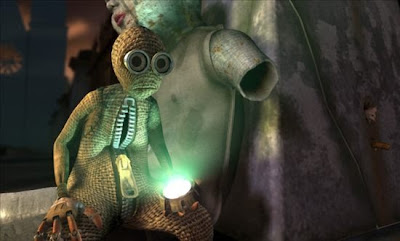 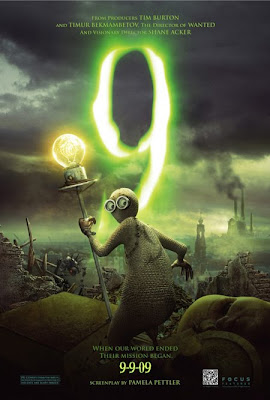 Nothing is new under the sun in Hollywood, and themes tend to run cyclical. At the moment it seems that audiences are going to be treated to another round of post-apocalyptic films. There is an impending adaptation of author Cormac McCarthy's Pulitzer Prize winning, The Road starring Viggo Mortensen, The Book of Eli starring Denzel Washington, the dark-horror comedy, Zombieland, plus a new chapter of George Romero's undead saga, Survival of the Dead, also looms on the horizon (finished, but awaiting a distributor).

Last night I watched a preview of 9, from writer/director Shane Acker and producers Tim Burton & Timur Bekmambetov. The CGI-animated film features an eclectic, yet strong voice cast including Elijah Wood (as "9"), Christopher Plummer, Martin Landau, Jennifer Connelly, John C. Reilly and Crispin Glover
The film takes place in a world parallel to our own, in which a sapient rag doll called 9, comes to life, and finds himself in a devastated world where all humans are gone, and it is only by chance that he discovers a small community of others like himself taking refuge from fearsome machines that roam the earth intent on their extinction. Despite being the neophyte of the group, 9 displays strong leadership qualities and convinces the others that hiding will ultimately do them no good. They must take the offensive if they are to survive, and they must discover why the machines want to destroy them in the first place. As they'll soon come to learn, they have a connection to past events and the very future of civilization may depend upon them.
I hadn't initially been interested in seeing this movie, but free passes will coax me into watching just about anything and afterwards I was very glad that I went. 9 was riveting from the start, easily pulling the audience into its narrative. I sat in a fully packed theater that ran the gamut in age, race and gender, and the movie was so good that not a single smart ass talked, snorted derisively or even commented back to the screen. That ain't bad in a packed house folks. I won't say anymore about the movie, so as not to spoil it, but please take my recommendation and go see this cool flick.
For family's with small children, let me say that the film is rated PG-13 for violence and scary images, but there were younger audience members in attendance, and I believe that the film doesn't go overboard in this respect. I believe that today's savvier kids can take this type of thing in stride, plus the story has a good message or two mixed in, and the characterizations are clever, funny and entertaining enough for a wide range of viewers.
Posted by Chuck Wells at 12:19 PM