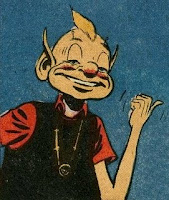 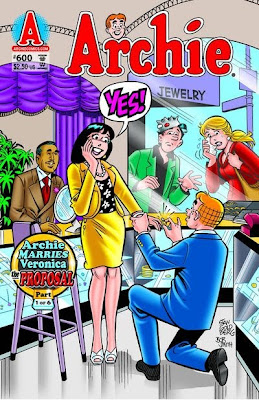 In this age of endless mega-crossover-marketing events, it's nice to know that every now and then something outside of Marvel and DC occurs that also grabs a bit of the industry's attention. This week's review covers a non-superhero event that may just end up drawing comparisons to Gemstone's classic 1990's-era 'The Life and Times of Scrooge McDuck'.

Archie Comics new release, Archie #600 is the first of six entertaining issues that will reveal how perennial teenager Archie Andrews came to propose to Ms. Veronica Lodge, ending the decades long love triangle between the two of them and the perpetual girl-next-door, Betty Cooper.
Written by film and TV producer Michael Uslan (the Batman films, National Treasure, Swamp Thing, Catwoman, The Spirit and Where in the World is Carmen Sandiego) and illustrated by Stan Goldberg & Bob Smith, "The Proposal" begins with the Riverdale gang celebrating their impending high school graduation and then Archie goes for a long walk down Memory Lane, not only a stroll of reflection mind you, but an actual street in Riverdale. Rather than spoil this neat story, I will caution readers to pay very close attention to the artwork of the opening four page sequence for some potential clues to how this tale may play out.
Needless to say, there is some hope for those of us who may have been a bit flummoxed to see Betty get the cold shoulder in this surprising media event. The remainder of this introductory chapter follows the graduation that is depicted [hint] of young Mr. Andrews who quickly pops the question, unaware that Betty and Jughead are witness to the scene. The ripples of the impending nuptials spread throughout Riverdale and Archie finds himself pressed into working for the wealthy Mr. Lodge; he does have to provide a satisfactory income for daddy's dearest after all and the die is cast for next issues wedding (perhaps of the century).
That's all for now, kiddies. I don't want to ruin anybody's fun, but the story is worth checking out and Goldberg's always dependable artwork is perfect for something like this. Archie Comics has offered their signature characters in manga style and in a more realistically drawn style in recent years, so its comforting to see things looking the way one would expect here, even if looks turn out to be deceiving.
Posted by Chuck Wells at 12:57 PM