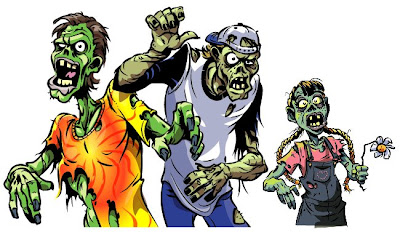 Tidbits of information have leaked out and a very few behind-the-scenes photos for George A. Romero's next film in his legendary Dead series (Night of the Living Dead, Dawn of the Dead, etc.), tentatively titled "Island of the Dead", have been posted over at Aint It Cool News. Romero's new zombie film is not a sequel to 2007's Diary of the Dead (as some rumors suggested it would be) and is said to be about survivors of a zombie attack who are trying to escape from an island that they are already on, and as they make a run for the local ferry it has already departed and now that they've missed the boat (so to speak) they are forced to confront the zombies that are chasing them.
TRIVIA: There was a 2000 film called 'Island of the Dead', which starred Malcolm McDowell and Talisa Soto, but this Romero film has no relation to that earlier effort.
Posted by Chuck Wells at 7:04 AM

Hope it's better than the last two.