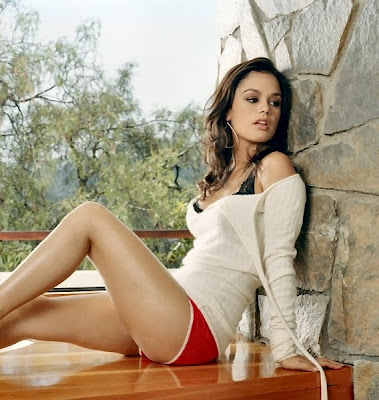 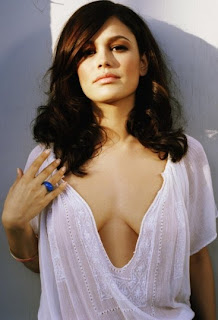 Today is my 49th birthday, so I selected a random cutie from the dust bin in honor of myself. The only criteria that I established was a high degree of femininity, an apparent "girlishness" factor, and preferably brunette.
Rachel Bilson is well-known for playing Summer Roberts on the drama series The O.C. Bilson made her film debut in the 2006 film, The Last Kiss and then co-starred in the "so-so" 2008 science fiction film, Jumper (which is where I know her from).
With all of this years superhero movies on the cusp of hitting theaters, I would like to say that I always thought that Bilson would be a great choice to play Donna Troy/Wonder Girl, if Warner Bro's could somehow avoid any of their politically correct rebooted Teen Titans and stick with the original quintet of Robin, Aqualad, Kid Flash, Speedy and Wonder Girl. As good as the 1980's New Teen Titans were by Wolfman & Perez, the classic grouping would be nice, and it might appeal to the right advertising age-demographic, of course one of Will Smith's kids would have to be shoehorned in these days, but that's somebody else's version. Not mine!
Before you ask, the only concession that I would willingly make would be to have Bilson in Troy's second, full-body red costume with the stars, rather than the Wonder Woman hot pants variation.
Posted by Chuck Wells at 1:18 PM

I know nothing about this woman at all, but she sure is mighty purdy!

happy birthday, mate! I'll sink a large one for you this night while I'm propping up the bat at me local. scotch ok with you?

You're on Joe! Cash, she's twenty-nine and I could live with that choice.

Thank you, Jack! Hope you are doing well lately. What's up with that science class blog?

Happy BD it was nice to Share your Beauty and Grace, may you find Peace& Success you deserve"

Happy BD Thk You for sharing yr. Beauty and Persona, may you continue to Shine among the Universe...............Lion