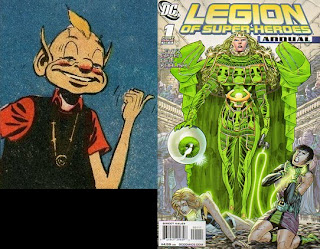 Legion of Super-Heroes Annual #1 is a tour de force standalone issue that reunites two legendary Legion creators, writer Paul Levitz and co-plotter/artist Keith Giffen, for an oversized story that effectively showcases what an “annual” really ought to look like. Folks this is also what an annual event is supposed to be like. Highly recommended!
Another innocent victim becomes possessed by the Eye of Ekron and is transformed into the new Emerald Empress on the planet of Orando in “Here Eye Am”. After assuming control of Sensor Girls home world, the first order of business for this Empress is to snatch a passing Legion cruiser out of space. Not the best of luck for vacationing lovers, Lightning Lass and Shrinking Violet, who are hard pressed to stop this powerful villain from wreaking more havoc on the planet and its population. Of course, the Eye itself isn’t satisfied toying with a single pair of Legionnaires, and the alien device allows a signal to leak out in order to entice more members to head for Orando. No surprise, that Sensor Girl is among the group to respond.
Rather than spoil major elements of this newly released special issue, I will just encourage fans of the Legion to pick this up and to easily suggest that any fan of superheroes would probably enjoy this book too. Giffen’s art style has returned to its original (1970’s) Jack Kirby-inspired roots and that is a welcome thing – at least to me – and for my money ($4.99) this is the first true indicator that writer Levitz has ably returned to his Legion roots in fine form. I’m sorry, but the ongoing Legion title that Levitz writes is badly marred by having an inferior artist work on the book, I gave it a try for a couple of issues, but to keep me coming back regularly, a series has to have both a high quality writer & artist. This annual is much more akin to what I would be amenable to buying as a lifelong fan of the Legion of Super-Heroes. It’s too bad that Giffen is moving on to another DC series, but there are hints at the conclusion of this annual that could be picked up on down the road, so perhaps these two classic creators will join forces on the LSH once more.
As an added treat for fans, the annual offers a few special back-up features that – again – mimic the kinds of extras that used to be common in such specials. Brian Douglas Ahern provides humorous artwork for a fun four-page strip called "Legion History: The Board Game" which gives a brief overview of past Legion storylines. There is also a two-page "Legion A to Z" featurette and a nice double page teaser ad for an upcoming (March) one-shot focusing on the classic Legion of Super-Villains lineup.
Legion of Super-Heroes Annual #1 is an awesome throwback to when annuals had big storylines that couldn't fit into the main series, but still had relevance. This may be the most fun book that DC has published in quite a while.
Posted by Chuck Wells at 10:35 AM

Great to hear Giffen is dipping his pen on another Legion book. Wein and Gfiffen's original run on the LSH is one of my all time faves.

I just read an interview with Levitz and he says that Giffen is letting everybody know that he is up for more Legion tales.