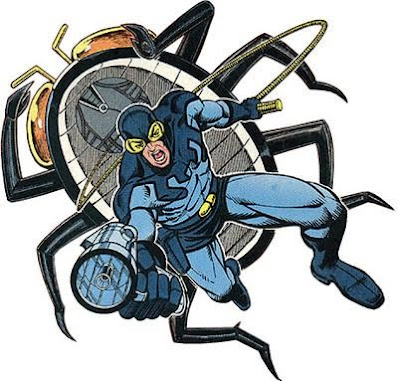 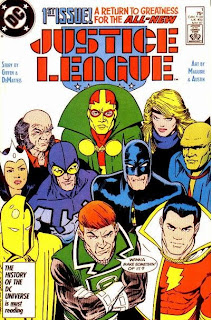 DC acquired the Charlton Action Heroes in the mid-1980s, and used their Crisis on Infinite Earths crossover event to integrate them all into the DC Universe. The Blue Beetle who had originally been created by Steve Ditko first appeared as a back-up feature in Captain Atom #83 (Nov. 1966), but the character also had his own series, written by Len Wein, which ran for 24 issues from June 1986 to May 1988. A story in Secret Origins #2, explained the origins and careers of both Ted Kord and Dan Garrett (the golden age version) as the Blue Beetle in the post-Crisis continuity.

Ted Kord was an industrialist and owner of Kord Industries; after his mentor Garrett died in battle, Kord continued his heroic legacy as the Blue Beetle, but without Garrett's powerful scarab, relying instead on his scientific know how to wage war on crime. Kord's signature equipment was his bug-shaped personal aircraft, which he entered and exited typically with a cable suspended from the cockpit. He also eschewed personal weaponry, except for a pistol that made a blinding flash of light and a strong air blast to gain the advantage when he closed in for hand-to-hand combat.
Although his solo series was fairly short-lived, the Blue Beetle probably became best known as a wisecracking member of Keith Giffen and J.M. DeMatteis's lighthearted, five-year run on Justice League International, where he was memorably partnered with fellow hero Booster Gold, and the two quickly became best friends. Among fans, they were known collectively as the "Blue and Gold" team.
Posted by Chuck Wells at 7:14 PM