From the Dust Bin: The Questor Tapes (TV) 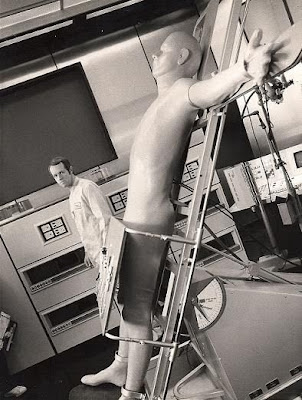 The Questor Tapes was one of a series of television movies created by Gene Roddenberry during the 1970's, including Genesis II, Planet Earth, Strange New World, and Spectre, all of which were intended as pilots for prospective TV series. Near the end of 2009, I took a look back at each of these classic sci-fi pilots and today's post finishes up the set (I'm still looking for a copy of Spectre).
Project Questor was the brainchild of the missing genius Dr. Emil Vaslovik. He had developed plans to build a superhuman android, putting together a team of the world's foremost experts to build it, even though individually they did not understand the components that they were working with — they were only able to follow the instructions and install parts left by Vaslovik, who had disappeared. Attempts to decode the programming tape were unsuccessful and approximately half of the tape was erased. They decided to substitute their own programming, over the objections of Jerry Robinson (played by Mike Farrell), the only team member who had actually worked with the mysterious inventor. Unfortunately, he was overruled by the head of the project, Geoffrey Darro (played by John Vernon).
When their efforts fail, Robinson persuades Darro to allow what remains of Vaslovik's tape to be loaded, however there is seemingly no response. Once left alone, the android (played by Robert Foxworth) comes to life and it adds various cosmetic touches to its previously featureless outer skin, then leaves the lab. The android forces Robinson to accompany him in a search for Vaslovik, but the two are pursued by Darro, following a tiny scrap of the original programming. Questor (who becomes more "human" as the story progresses) only knows that if he does not find Vaslovik before the end of a countdown, his nuclear-fusion core will overload and explode. Vaslovik programmed this to prevent his creation from being misused, and time is running out.
Robinson and "Questor" develop a friendship during a series of adventures that finally transport the pair to Mount Ararat, where with seconds to spare, Questor's timer is made safe, and he discovers Vaslovik (guest star, Lew Ayres), who tells Questor and Robinson that he too is an android; the last of a series, going back to "the dawn of this world," left there by "Masters" to serve and protect Mankind. Each had a lifespan of several hundred years, before subsequently assembling his own replacement, but Vaslovik had been damaged by the unexpected, rapid advent of nuclear physics and its fruits. Questor's design corrected these failures, and finally Vaslovik is able to die in peace, after asking Robinson to help Questor learn about humanity.
Darro, having followed the pair, has heard enough to know how important it is that Questor be allowed to fulfill his mission. Unfortunately, he has brought the military with him, to destroy the android. The cynical Darro believes that this is proof that humanity does not deserve Questor's help, however he leaves, telling the military commander that the android has escaped, and to send in jet fighters to eliminate the threat. Darro then takes off in the jet that Questor and Robinson had used, turning on a transmitter so that they will think that the android is aboard. The plane is destroyed, leaving Questor and Robinson to begin their mission together.
The Questor Tapes had a 13-episode series pre-approved before the movie was even aired in 1974, with Robert Foxworth and Mike Farrell reprising their original roles. The green-lighted series was intended for Friday nights at 10 pm on NBC — the notorious "death slot" where the final season of the original Star Trek had withered. Ultimately a conflict between Roddenberry and Universal/NBC over the content of the proposed series doomed it, most notably ignoring the key revelation at the end of the TV movie and eliminating the character of Jerry Robinson. These changes proved too much for Roddenberry, who abandoned the project and no additional episodes were ever produced. The Questor android is widely acknowledged to be the inspiration for Roddenberry's Star Trek: The Next Generation character, Data.
[Thanks again to Catacombs follower, Jim Shelley, for providing this film on AVI disk.]
Posted by Chuck Wells at 10:24 AM

Man, did I love The Questor Tapes. Just a few years later, I was surprised to learn that Philip K. Dick was a big fan of it as well. He wrote an essay about recurring themes and concepts in his own work, and mentioned Questor as an excellent illustration of the things he was describing. The whole idea of humans who seem to lack empathy or compassion contrasted with a robot who wants to feel emotion -- you can see what he was talking about.

Also, D.C. Fontana wrote a really good novelization -- it draws on bits from more than one draft of the script so there are things in the book that didn't make it to the screen, but the story is unchanged. It definitely preserves the feel of it, and the humor. Highly recommended if you ever come across it, but good luck trying to find it today...

Just ran across this: The Questor Tapes (in development).